Attention by civil society and governments to global warming in the 1990’s was a sequel to action on both acidic precipitation and depletion of the stratospheric ozone layer. The latter issues had been addressed, with some success, by adopting the strategy of reducing the emissions of the limited number of industries that caused the problems. The same approach was applied to global warming. This was a mistake because a vastly larger number of players would have to be engaged — not just a few industries, but for starters all users of fossil fuels.

Effective attention to global warming required a broader strategy and a wider range of actions. It still does, with much higher stakes than those of the 1990’s. The globe has already warmed by 1ºC since the nineteenth century, and northern Canada by 2.5ºC. Dispassionate prognosis, for example, by the Harvard Project on Climate Agreements, suggests that under the Paris Agreement there is a 50% probability of warming being limited to 2.7ºC — and a 50% probability of warming going above 2.7ºC, even if all the commitments are met. Compare that with the Paris target of 2ºC and the politically popular illusion of 1.5ºC!

There are two fundamental considerations:

Canada played a significant role in putting global warming on the international agenda. The Canadian government also engaged with provincial and territorial governments, and with non-governmental organizations and one business sector, the insurance industry. For example, in 1994, the Canadian Council of Ministers of the Environment reaffirmed its commitment to stabilize greenhouse gas emissions by the year 2000 and to develop sustainable options to achieve further progress in the reduction of emissions by the year 2005.

The governments and citizens of Canada failed to meet this commitment and every subsequent one; emissions have continued to rise. If Canada, with political will for two of the past three decades has failed and is likely to continue to fail, the prospects for the Paris Agreement are poor — reason enough to pay at least the same attention to adaptation as to mitigation. There is a lot of room: in Canada, we are talking a little, but doing almost nothing.

Mitigation has an effect on the scale of the globe, whereas adaptation is essentially local. Investors in adaptation are more obviously the beneficiaries than investors in mitigation, where benefits may be greater in faraway places. For government and business, adaptation is just sane, knowledgeable risk management, consistent with modern management approaches. Furthermore, the foundation for adaptation was built some 15 years ago with studies in many countries, including Canada. Consequently, a starting place already exists. 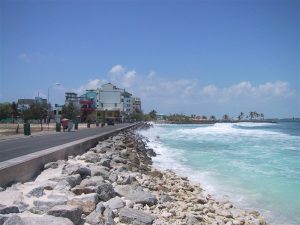 Island states, in particular, are already taking action. An example: construction of a two-story mosque in the Maldives where the upper floor provides a safe place for the entire population of an island during a storm surge or a tsunami, a solution that provides a benefit in both the short and long terms. (photo: Dr. Edward Manning, Tourisk, Inc.)

The financial industry in general, not just insurers, is now paying attention to global warming. Central banks, traditionally conservative institutions, are clear. Mr. Timothy Lane, a Deputy Governor of the Bank of Canada, referred to direct economic costs by 2050 of 20 – 40 billion dollars, not counting ecological and social costs. At the other end of the scale, the proportion of Canadian homeowners purchasing overland flood insurance is climbing rapidly. So, some of us get it!

It is high time for the federal, provincial and territorial governments to change their desultory approach to advisory bodies on adaptation and to put some flesh on the bones. If the federal government were looking to really make a difference, an obvious place to start would be to take the substantial subsidies still paid to the fossil-fuel industry and apply them instead to adaptation, for the benefit of Canadians living now who will have to cope with the inevitable consequences of global warming and for the generations to come.

* This comment is based on a workshop held by the Canadian Association for the Club of Rome. The panelists were J-C Amado, PwC; Ian Burton, University of Toronto; Ted Manning, Tourisk, Inc. John Hollins is Chair of CACOR.

About the Author: John Hollins 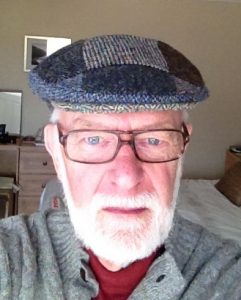 John Hollins (B.Sc. Physics, Ph.D. Biophysics) has been active in community affairs for some 40 years. During his career, he was Executive Director of the Energy Council of Canada and Director of the Energy Branch and Science Advisor at Environment Canada. For 15 years he represented Canada at, and served as Chair of both, the OECD Group on Energy and the Environment, and the International Energy Agency’s Programme of Energy Technology Systems Analysis. He is currently Chair of the Canadian Association for the Club of Rome.