This retrospective was first published on FACETS on 22 September 2022.

Robie (Rob) Macdonald studied large-scale ocean systems, including the global carbon cycle, climate change and contaminants, in the Arctic and Pacific Oceans. He was recognized internationally as one of the country’s primary experts on the behaviour of contaminants in the marine environment, and he brought new insight and a broad perspective to every project.

Among his many accomplishments, Rob was a leader in the international effort to ban the “dirty dozen” of persistent, organic, bioaccumulative pollutants, as well as in the ban on polybrominated diphenyl ethers in Canada. Although his contaminant work was highly influential on national and international policy, Rob preferred to study contaminants as tracers of natural pathways. He wanted to understand how systems worked and how they were changing as a result of climate change.

The originality and excellence of his work were widely recognized, but it was his generosity and wisdom in mentoring others that made the greatest difference to the people who knew him.

Rob received a Ph.D. in Chemistry from Dalhousie University in 1972, with a thesis on the oxidation of ethylene. After working as a post-doctoral fellow for three years, he became a Research Scientist for Fisheries and Oceans Canada in 1975. When the Institute of Ocean Sciences opened in 1978, Rob moved into an office there, where he remained for the rest of his career. On retiring in 2013, he continued his research as an Emeritus scientist.

Rob wrote or co-authored 280 peer-reviewed articles, as well as numerous book chapters and reports. Even during the last year of his life, he submitted five articles and a book chapter.

The excellence of his work was widely recognized (Table 1). He held Fellowships in the Royal Society of Canada (2004), the American Geophysical Union, the Chemical Institute of Canada, the Explorers Club and the Royal Canadian Geographical Society. He received numerous awards, culminating in his being named an Officer of the Order of Canada in 2019.

As a federal government scientist, Rob’s expertise was recognized within government as well as in academia. He was promoted to the highest classification of Research Scientist, and in 2002 he received the Head of the Public Service of Canada Award. In 2015 he received the Prix d’Excellence, Fisheries and Oceans Canada’s most prestigious award. 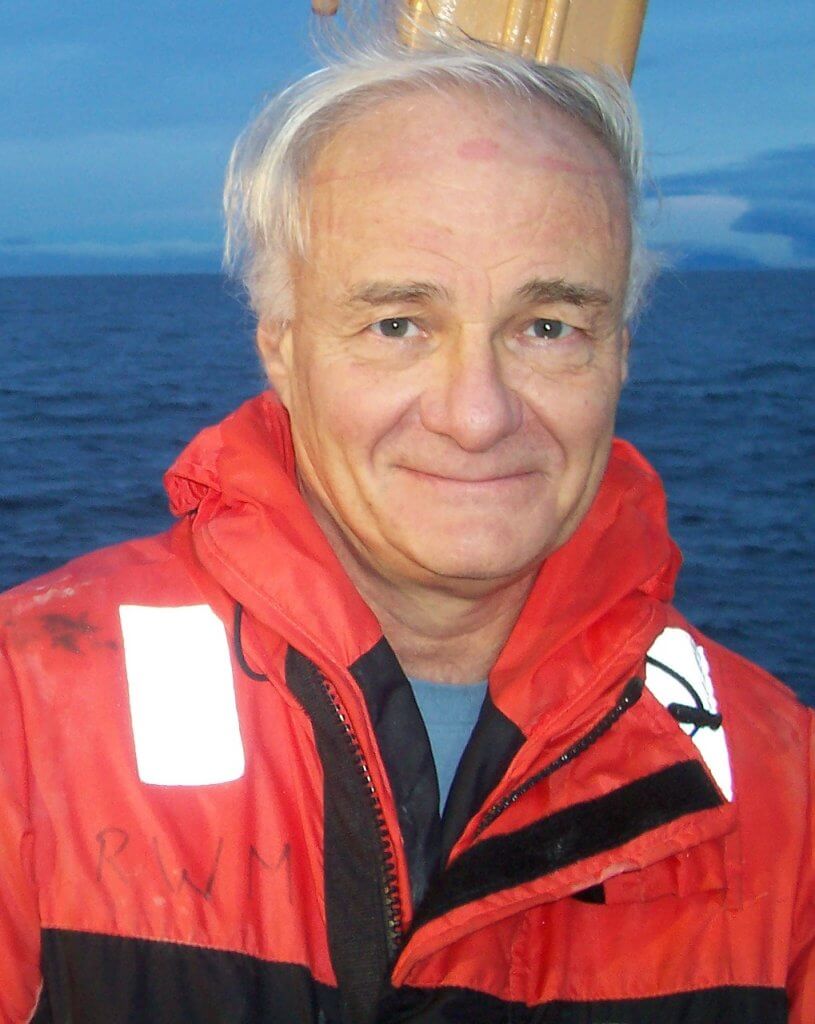 Rob brought a broad perspective to his work. He liked to stand back from the details to see the larger picture. To that end, he often constructed regional box model budgets, including budgets for organic and inorganic carbon (e.g. Capelle et al., 2020) and several contaminants (e.g. polyaromatic hydrocarbons, Yunker et al., 1999). He looked for the levers that could effect change in a system, in order to determine which processes actually mattered. He then applied this understanding to evaluate the sensitivity of particular systems to climate change (e.g. McGuire et al., 2009).

He built a deep understanding of the environment, brick by brick, first laying a solid foundation of budget and pathway studies, before applying that understanding to topical applied questions. For example, he used his basic work in freshwater budgets and oxygen stable isotopes (Macdonald et al., 1995) to develop a method to assist fisheries officers to identify whether salmon had been caught legally in the ocean or illegally in a river. He used a similar approach to assess the footprint of Victoria’s controversial sewage discharge in a regional context, based on a set of foundational geochemical studies (Johannessen et al., 2015).

His broad knowledge enabled him to bring insight from one field to inform another. For example, earlier research had focused on contaminants or climate change, but rarely both simultaneously. With his knowledge of climate change and its effects on the carbon cycle, Rob showed that not all changes in contaminants in the environment or in food webs were related to changes in contaminant discharge. He linked the two fields in a way that produced a new understanding of contaminant trends, particularly in the Arctic (e.g. Macdonald et al. 2003).

Rob’s perspective on ocean and atmospheric pathways proved essential for integrating the state of knowledge on arctic contaminants, as part of the Arctic Monitoring and Assessment Programme and the Canadian Northern Contaminants Program. He led a 140-page synthesis of Canadian Arctic contaminant pathways (Macdonald et al. 2000), which was one of the most comprehensive analyses of contaminants in the Arctic for its time, an accomplishment for which he was awarded the Canadian Meteorological and Oceanographic Society President’s Prize (2000).

While his studies and syntheses led to new perspectives on the anthropogenic contamination of the Arctic, they have perhaps even more importantly illuminated the biogeochemical systems into which the contaminants enter. Working, as always, with colleagues, Rob used the patterns in stable and radioactive lead isotopes in sediment to map major Arctic water circulation patterns (Gobeil et al., 2001). His work also led to an improved understanding of the processes that lead to amplification of contaminants in the environment (e.g. Macdonald et al. 2002). He also showed how large-scale animal migrations, like those of Pacific salmon or seabirds, are efficient vectors for contaminants (e.g. Blais et al. 2007).

In his research Rob emphasized the importance of timescale. On the small scale this meant recognizing that biological mixing of surface sediment could smear together years or even thousands of years of accumulated sediment. He developed a method that could unmix core records mathematically, to show what the original history must have been (Macdonald et al., 1992). On the global scale, he explained that no matter how carbon is distributed among compartments in the modern carbon cycle, the continued addition of ancient fossil fuels increases the total amount of carbon in the modern environment; there is no mechanism to remove it on a timescale relevant to humans.

Rob believed that peer-review represented the best form of quality control for science and that the science wasn’t done until it had been reviewed and published. He said that papers published in good journals represented the platform of a researcher’s expertise and credibility. He also believed that – regardless of the political culture of the time – it was a government scientist’s responsibility to build such a platform of expertise, based on reviewed and published science, so that they could offer the best possible advice to government.

He stressed the importance of field work, as well. He pointed out that the word autopsy came from “seeing for oneself.” He believed that there was no substitute for getting out and seeing the environment first-hand. To this end, he spent substantial time in the field, including approximately 40 sampling cruises on ships and many other expeditions by small boat, airplane, helicopter and snowmobile.

Advice on science and life

Rob thought deeply about science and life. He formulated these ideas into advice, which he shared freely with students, colleagues and even managers. Here are just a few of his conclusions:

Finally, Rob said that the most important conversations about oneself happen when one is out of the room. Those conversations are guided by one’s behaviour, compassion, and choices. In the months since Rob’s death, there have been a great number of conversations about him. He made significant and lasting contributions to science, and more than that, he made a real difference to people.

Macdonald RW, Paton DW, Carmack EC, Omstedt A. 1995. The freshwater budget and underice spreading of Mackenzie River water in the Canadian Beaufort Sea based on salinity and 18O/ 16O measurements in water and ice. Journal of Geophysical Research: Oceans, 100: 895-919.