Above normal temperature winter is expected across eastern Canada

The highest probabilities (60% and +) for such a forecast are in the Maritimes, over the Great Lakes region and over northern Canada. Central prairies and continental BC have equal probability chances. Coastal BC have ~40 probability for below than normal temperature winter.

Elevated chance of above normal precipitation over certain regions of Canada? 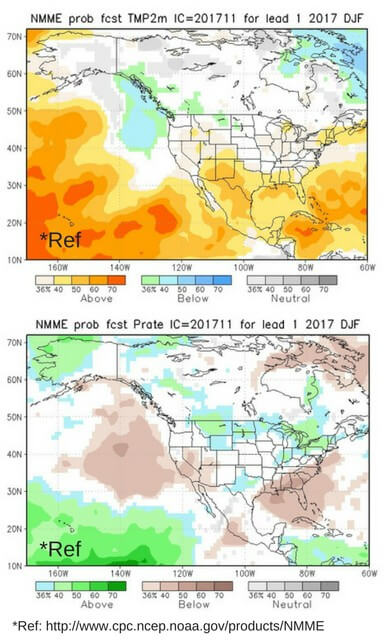 There is >40% probability for this outcome around southern and central AB, southern SK and the most southern parts of ON. Some parts of Newfoundland and Labrador are also expecting ~40% of above than normal precipitation.

We are currently experiencing mild La Niña condition (just around -0.5°C) in the central equatorial Pacific. However, ECCC predicts moderate La Niña conditions (-1.0 °C) to develop this winter and to persist in the following spring. According to the longer lead seasonal forecast issued by International Research Institute (IRI), there is a probability of above than 70% that La Niña condition will prevail this winter and of ~45% to continue in spring. PDO index is expected to become negative this winter, with North Pacific colder waters approaching the west coast. According to the ECCC seasonal forecast, La Niña will probably have impact on the coastal BC regions.
Weak NAO is forecasted for DJF17, mainly in December, after which skill is low. PNA index will likely stay positive (until the end of December, according to the CPC).

Seasonal forecast by other centers:

Temperature (figure on right, top): There is a difference between CanSIPS and longer lead forecast from NMME (upper figure), especially in the Maritime region, eastern Canada and over the Great Lakes where NMME forecasts near normal and equal chances for all possible outcomes. Over central Canadian prairies and coastal BC, both systems are in accord for equal-chance and below normal temperature values respectively. Longer lead seasonal forecast from IRI is in accord with CanSIPS with respect to the temperature forecast this winter. 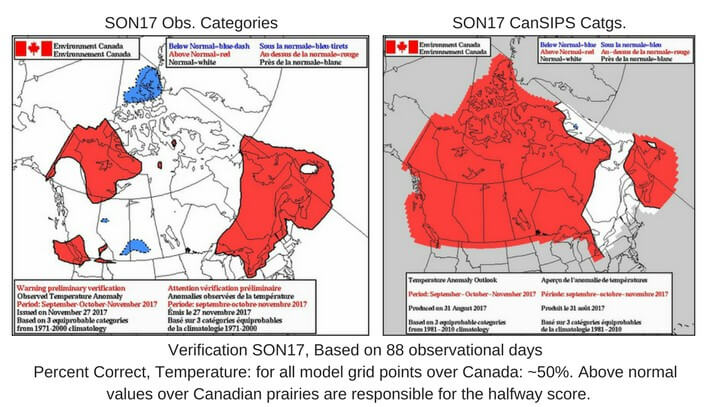