The CCGS Amundsen: A Success Story In Arctic Oceanography 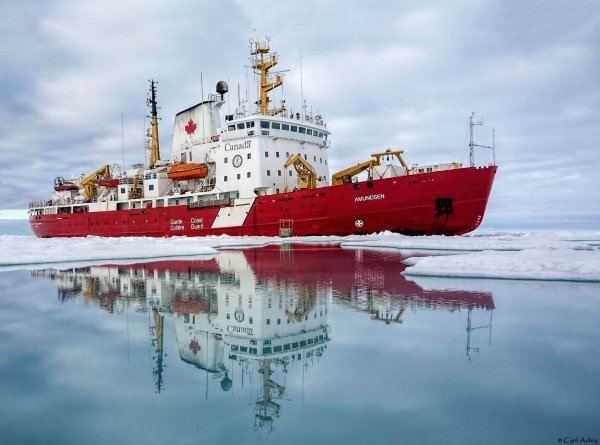 As early career researchers, we are always on the lookout for learning more about the scientific landscape in which we evolve. We are six MSc and PhD students from the sea ice group at McGill University, and our research focuses on the Arctic Ocean. We were naturally interested in the outreach workshop hosted by Amundsen Science on March 23, 2021 and curious to learn more about the future expeditions and research opportunities aboard the Canadian Coast Guard Ship (CCGS) Amundsen. We also wished to deepen our knowledge about the history, the research apparatus and the expedition logistics of this renowned vessel. Organized in the broader context of the Amundsen scientific planning meeting, the outreach workshop aimed at connecting with the public and with different groups of potential users (like us!), and at raising awareness about the impact and the importance of the CCGS Amundsen for Canadian Arctic research. In the following, we summarize the content of the workshop and share a few takeaways.

History of the Amundsen

In the 1990s, the absence of Canadian polar research ship infrastructure impelled scientists to deploy ice camps for ocean research, small settlements directly established on the pack ice. While it certainly was a unique experience, it required quite a lot of physical work to maintain the camps, and the number of oceanographers that could go to sea was limited. By design, the camps were also missing on data from the polynyas, which are areas of open water surrounded by sea ice that are of special significance for ecological and oceanographic research. A few ships started being used for science during that time, specifically for studying the North Water Polynya, and the success of these early missions compelled the scientists to explore the western part of the Arctic. 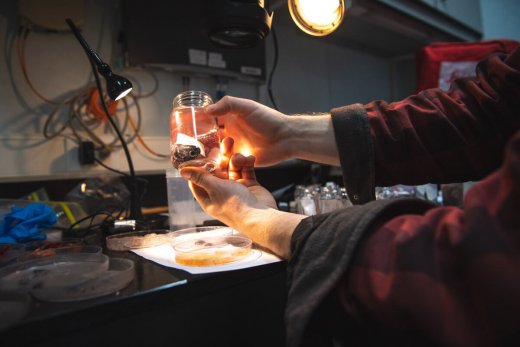 This is where the Amundsen’s story begins. A group of 54 researchers from 12 universities, led by the tireless Louis Fortier (1953-2020), brought forward the project of a Canadian icebreaker to NSERC. In March 2001, the Canada Foundation of Innovation (CFI) was allowed to fund the researchers’ ship project, and, in the dry docks of Les Méchins (Québec), the CCGS Amundsen rose from the decommissioned hull of the vessel formerly known as the CCGS Sir John Franklin. By September 2003, the ship, now equipped with state-of-the-art scientific equipment, was ready to start its inaugural year-long voyage with Martin Fortier as chief scientist. The Amundsen was part of over seventeen important expeditions: Canadian Arctic Shelf Exchange Study (CASES-2003), Nunavik Inuit Health Survey (2004, 2007-2008 and 2017), Circumpolar Flaw Lead (CFL), etc.

From the start, a productive collaboration developed between the Amundsen and ArcticNet, who were the primary user for the vessel. Another important collaboration was established with the oil and gas industries. This partnership had the objective to explore the Beaufort sea, although the public concern about oil spills raised ethical questions. By the end of the oil and gas partnership in 2015, the Amundsen team had seized the opportunity to learn how to balance the research interests of different stakeholders, designing expeditions that address the needs of academia, governments, communities, and occasional industrial partners. The several scientific collaborators who have joined the Amundsen adventure these last years have contributed to an increasing diversification of the exchanges onboard. 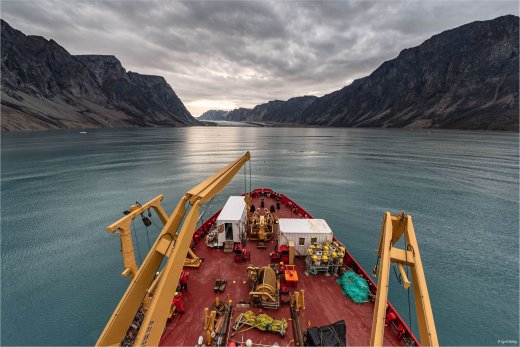 Since 2002, the Amundsen icebreaker from the Canadian Coast Guard fleet has been devoted to science. Over the years, the close partnership between Amundsen Science and the Canadian Coast Guard established the vessel as a leading force in Canadian Arctic Research. Amundsen Science is the non-profit organization managing the scientific mandate of the ship. It is also one of the 17 National Research Facilities supported by the Major Science Initiatives Fund of the Canada Foundation for Innovation (CFI). The CFI contributes to 60% of the funding while the remaining 40% relies on external contributions. Dedicated onshore and seagoing personnel from the Canadian Coast Guard play a key behind-the-scenes role in scientific expeditions boarding the CCGS Amundsen by managing the logistics and ensuring the maintenance of the vessel. The close connection to the user community (mainly governmental and academic researchers, but also extending to local communities or external partners) is also important for the Amundsen’s accomplishments. Indeed, the Amundsen Science team is driven by the will to understand and address the needs of the user community through several projects such as the Schools on Board Program dedicated to youth involvement, the annual expedition planning workshop, or the Inuit Health Survey (Qanuilirpitaa) across Nunavik.

Amundsen’s impacts in the scientific world

The workshop further discussed the instrumental role of the CCGS Amundsen and Amundsen Science in supporting Arctic research in Canada and at the international level. At the national level, the research icebreaker fosters Northern leadership, serving as ‘Canada’s premier networking platform’, in the words of David Barber (U. Manitoba), who went on describing the Amundsen project as an incubator of science for us to understand the Arctic and how it works. As a mobile lab, the icebreaker can connect different communities, and it is a strategic element in the planning of Canadian Arctic research infrastructure projects, such as the soon-to-be Churchill Marine Observatory. Its central role in national research earned the CCGS Amundsen a well-deserved place on our 50$ banknote! The Amundsen also boosts international partnerships, for instance, with its inclusion in the Arctic Research Icebreaker Consortium (ARICE), alongside other flagship vessels such as the R/V Polarstern. Marcel Babin (U. Laval) presented two of these successful collaborative projects, namely the Malina project (Canada-France-USA) that studied terrestrial carbon exports into the Arctic, and the Green Edge project (Canada-France) that investigated the blooming of marine ecosystems in the spring. These large scale and synergetic research projects were described as being the most scientifically productive, using the full capacity of the Amundsen. These several examples illustrate the importance of maintaining strong seagoing polar research capabilities for sustaining productive national and international networks. The Amundsen is not only present in the scientific community, but also in the public one. With projects like Artist on Board and media competitions, the vessel’s mission is shared across the world. This last competition gave the opportunity to fifteen journalists from twelve countries around the globe to embark on the Amundsen for a journey in the Arctic.

Future of the Amundsen 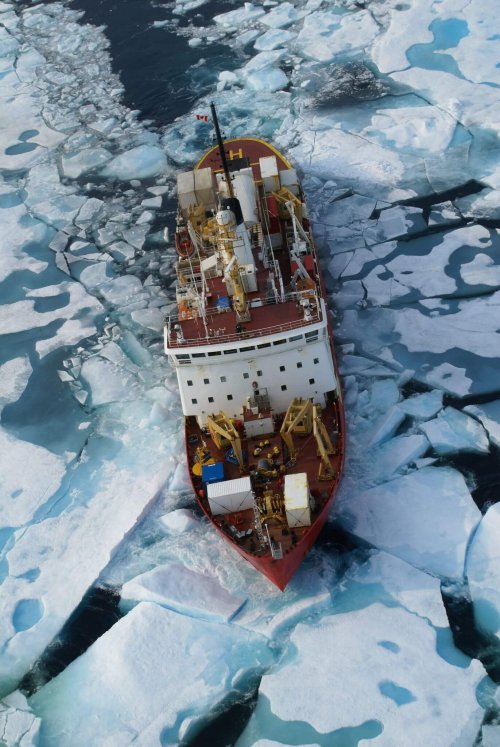 The last part of the workshop discussed future plans for the Amundsen. The vessel is now 42 years old and will undergo a complete refit to extend its life for ten more years. The repairs have started in May 2020 and will last until July 2022 (with summer 2021 as an interruption). These repairs will also equip the ship with new instruments to support both Canadian Coast Guard missions and scientific data acquisition. Beyond this life extension, the vessel itself might need to be replaced, and different options are considered. Building a new ice breaker dedicated to science is an ambitious and exciting, yet challenging project, that also depends on several political decisions, and discussions with the Government of Canada are undergoing.

Finally, the scientific program for the coming years was briefly discussed. The current CFI funding is arriving to an end, and the Amundsen team will be applying for an extension for the period 2023-2029. Alexandre Forest, executive director of Amundsen Science, reminded us that any project could be discussed and planned for the coming years: it’s time for new ideas! So far, upcoming projects include a study of the fragile ecosystem of the deep ocean using the new Comanche ROV, a study of the permafrost Carbon on the Beaufort Shelf, the Dark Edge program, and the Sentinelle Nord International PhD School in 2022. The Amundsen team is further devising a wintering in the Baffin Bay and a trade in ship time with France Flotte (program named Oceanographic Fleet Exchange).

The Amundsen, a success story

Reaching beyond its core scientific mission, with education and youth involvement programs such as Schools on Board, visits to Inuit communities, and opportunities for graduate students, the success of the CCGS Amundsen in the last twenty years is undeniable. It accumulates over 2 200 research days at sea, 250 000 nautical miles (11.5 times around the Earth), 116 teams in 20 major programs, 98 international organizations, and 26 Canadian universities. It definitely played and keeps on playing a major role in training a new generation of Arctic scientists.