– By Patrick McCarthy and Leanne Cormier –

Extreme fire behaviour can manifest itself in many ways, violent tornado-like vortices being one example. On April 19, 2000, a large out-of-control fire at a major flax straw storage facility in southern Manitoba produced numerous vortices. One vortex emerged out of the inferno, tossing a pickup truck. One occupant was thrown to his death, while two others were injured (Globe and Mail, 2000). On May 22, 2015, a small water bomber fighting a wildfire near Cold Lake, AB, encountered a strong vortex, partially embedded in the smoke, causing the plane to roll over and crash, killing the pilot (Transportation Safety Board of Canada, 2016).

Traditionally, the forest fire-fighting community has used the term “firewhirl” to describe fire-related vortices of any scale. Cormier (2013) summarized the etymology of “firewhirl” (sometimes “fire whirl”), noting variations such as “fire devil”, “fire whirlwind” (with or without a hyphen), and “fire swirl.” Cormier also found newer versions, popularized by the media, such as “fire tornadoes” and “firenadoes.” Among social media platforms, terms like “ash devil”, “pyronado”, “pyro-tornado”, “smokenado, “smoke-nado”, “smoke funnel,” were observed.

Cormier (2013), Lareau et al. (2018), and others have recognised that these various synonyms poorly capture the breadth of scale and intensity for fire-induced vortices. Goens (1978) attempted a scaled system, from smallest to largest: Fire Devils, Fire Whirls, Fire tornadoes and Fire Storm. That proposal was not widely adopted.

The accepted meteorological standard for fire-related clouds is the recently introduced term “flammagenitus” (World Meteorological Organization, 2020). Prior to that, meteorologists colloquially began to use the prefix pyro- as early as 1991, with “pyrocumulus” (Ludlum, 1991) and pyrocumulonimbus (Crosby, 1993). Those two terms began to appear in journals in the mid-2000s (Fromm et al, 2010) and by the end of 2013, both terms had been added to the American Meteorological Society (AMS) Glossary (2000d, 2000e). “Pyroconvection” (Real, et al, 2007) and “Pyro-tornadogenesis” (McRae, et al, 2013) expanded the use of the prefix.

Among the scale of atmospheric vortices, the term “whirl” seems to be the least threatening. The pyronado category is similar to the “landspout” in scale. It is also somewhat similar to the scale of a “gustnado”. Both terms are included in the AMS Glossary (2000a, b). The term pyrotornado has a larger, violent character.

Since Cormier’s original proposal, numerous large fire-induced vortices have been observed and documented. Often, dramatic videos and photos have been shared in the traditional and social media, piquing the public’s interest.

While the scientific naming of these terms may be intuitive to scientists, some of these names, particularly the long ones, may be cumbersome for the general public. The use of a hyphen after the pyro- prefix could more clearly distinguish the root word.

Cormier mentioned “firestorm” in the original proposal, and referenced a number of highly destructive historic events. The word remained off that scale since it was a very complex phenomenon. It may include one or more pyrotonadoes, similar to a large, violent supercell producing a wide swath of destruction. Recent research (e.g. McCrea et al, 2013, and Lareau et al, 2018) indicate that firestorms have a large mesoscale circulation. The AMS Glossary (2020c) defines a mesocyclone as “a cyclonically rotating vortex, around 2–10 km in diameter, in a convective storm.” This is similar in scale to recorded firestorm events, such as the October 8, 1871 Peshtigo, Wisconsin, firestorm that killed an estimated 1200-2500 people (Gess & Lutz, 2003). Therefore, “pyromesocyclone” (or pyro-mesocyclone”) could define these large cyclonic fire events.

A modified and expanded version of the Cormier fire vortex-related nomenclature is proposed: 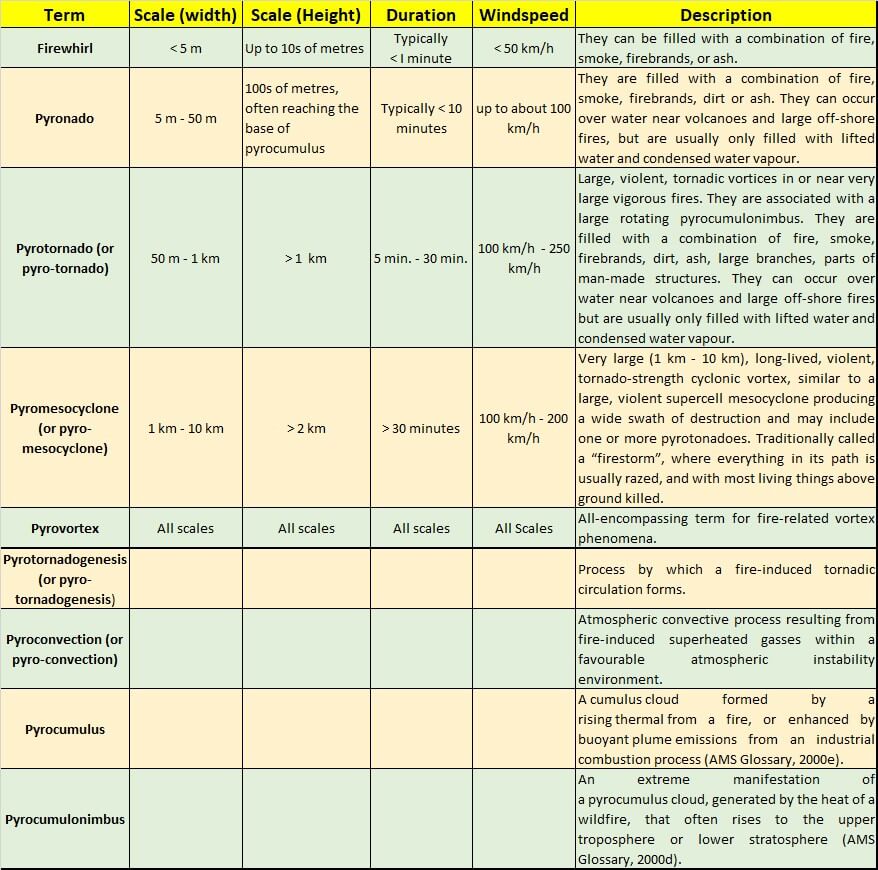 The new nomenclature provides a scaled scientific approach to fire-related atmospheric processes. In addition, consistency in research, and clarity in messaging, training and education could also be achieved. 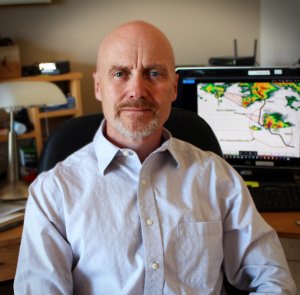 Patrick McCarthy is a retired Meteorological Service of Canada (MSC) meteorologist. He began his career working with the Alberta Weather Centre as a summer student in 1984; working with their severe weather program over five summers. After becoming an operational meteorologist for MSC in 1989, he spent two years in Gander, NL. He was transferred to the Prairie Weather Centre in Winnipeg and came a severe weather specialist. He ended his career as Head of the Prairie and Arctic Storm Prediction Centre. He remains passionate about weather and is an active storm chaser. 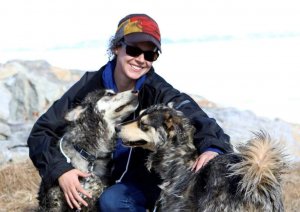 Leanne Cormier studied at the University of Manitoba in 2013, graduating with a Bachelor of Science degree specializing in Atmospheric and Hydrological Sciences. She now works at Environment and Climate Change Canada as a Meteorological Technologist fixing weather stations all over Manitoba and Nunavut and maintaining various networks. When not flying to the Arctic, she enjoys working on building her tiny house on wheels with her husband Steve and relaxing with their two cats, Oscar and Elliot.

Did you enjoy this article? Subscribe here to get the latest from the CMOS Bulletin!

Extreme 2014 wildfire season in the Northwest Territories
Did Anthropogenic Climate Change Increase the Chance of an Extreme Wildfire in the Fort McMurray Area?