Above normal autumn is expected across Canada

Above normal temperatures are likely to occur everywhere in the continental Canada. The highest probabilities (70% and +) for above normal forecast are over the Hudson Bay, Coastal BC and western Canada. Northern QC, northern ON and MT, Great Lakes region and coastal BC have more than 60% probability for an above normal autumn. 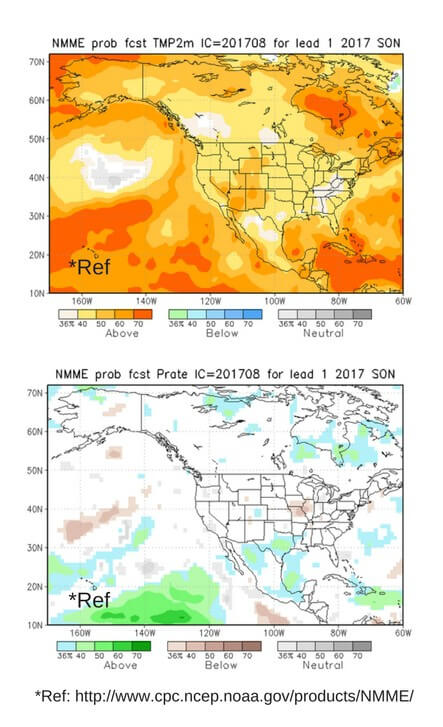 ECCC predicts weak La Nina conditions to develop in SON17 and to persist in the following winter. According to the longer lead seasonal forecast issued by International Research Institute of Columbia University, there is a probability of more than 50% that the neutral ENSO conditions will remain this winter. Negative PDO index will have moderate influence to the coastal BC. Weakly NAO is forecasted for SON17, mainly in September, after which skill is low. PNA index will likely stay positive (until the end of August, according to the CPC). Positive PNA index is historically connected with above average temperatures in the Canadian south west.

Temperature (figure on right, top): according to the NMME (North American Multi Model Ensemble) (lead 1 month), probability of above normal temperatures (>60%) is forecasted in eastern Canada and Maritimes. Coastal regions of BC, central BC and southern MT have equal chances probabilities for temperature this autumn. Besides this equal probability chances, NMME forecast is very similar to CanSIPS (15 day lead).

Precipitation (figure on right, bottom): According to the NMME there is >40% probability of above normal precipitation over northeastern parts of QC and northwestern ON. Similar expectancy of equal probability chances for precipitation is expected in all other parts of Canada. 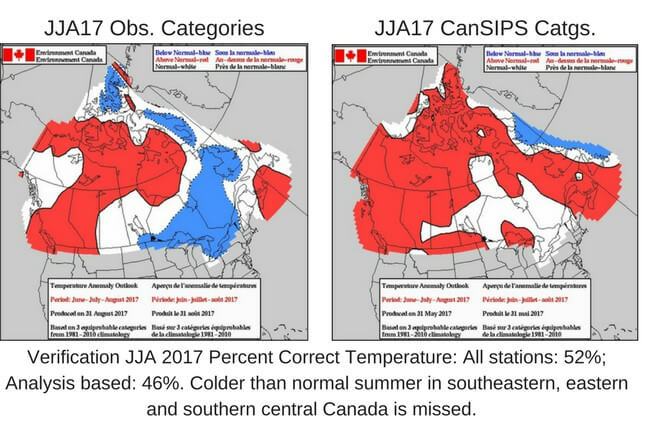