Meteorologists use many tools to forecast Canada’s weather. Among which, radar is a primary tool that provides 3D observations of the atmosphere with high temporal and spatial resolution to assist in forecasting short-term severe weather events such as thunderstorms, tornadoes, hurricanes, ice storms and blizzards.

In 2016, the Meteorological Service of Canada (MSC) operated a network of 28 Doppler weather radars across Canada. In addition, there were 2 radars owned and operated by the Department of National Defence (DND), and a research radar owned and operated by McGill University which together comprised the 31 sites in the Canadian Weather Radar Network (CWRN). Most of the infrastructure and hardware in the network was beyond its 25-year life expectancy. The network had radars of several different generations, with some of them 30-40 years old which relied on obsolete technology that could no longer be procured, maintained or upgraded. Additionally, the McGill University radar was one of the oldest with unique technology and was the sole source of Canadian radar data for the Montreal area.

The 2008 Commissioner of the Environment and Sustainable Development (CESD) audit on ECCC’s Severe Weather Warning Program concluded that MSC’s existing monitoring networks were becoming obsolete and at increasing risk of failure, notably a large percentage of the networks were approaching or were beyond their planned operational lifespan. To revitalize Canada’s weather services, the Government of Canada’s Budget 2011 and Budget 2013 announced multi-year funding to further strengthen Canada’s meteorological services through new federal infrastructure investments in radars. Funding from Budget 2013 was split into 2 gates, Gate 1 – Definition phase and Gate 2 – Implementation phase (Figure 1).

During the Definition Phase (2014/15 – 15/16), ECCC was tasked with reviewing the approaches for accomplishing the project goals, defining user requirements, developing high-quality estimates for the radar replacement project, and developing a detailed project plan to replace the existing radars with modern technology.

On February 28th, 2017, Canada’s Minister of the Environment and Climate Change Canada announced investments to modernize Canada’s weather-forecasting infrastructure. As part of this initiative, an $83-million contract was awarded to Selex ES GmbH (now Leonardo) for 20 new weather radars to replace existing radars across the country by 2023. The contract on the modernization of the weather radars also contains options to replace all remaining radars in the Canadian weather-radar network by March 31, 2023. So far, 6 additional radars have been added by the Government, for a total of 26 new radars and an overall investment of $107 million.

Gate 2 also known as the implementation phase commenced in fiscal year 2016/2017, with the start-up of the Canadian Weather Radar Replacement Program (CWRRP). This phase is a seven-year infrastructure program that will replace the existing radar network with new modern Dual Polarized radar systems. This project will ensure that ECCC can continue to provide Canadians with the weather information they need to make informed decisions to protect their health, safety, and security. The outcome of this project will be a modern, affordable, and sustainable network of reliable weather radars covering a larger area of Canada – through extended range capabilities, and the addition of a new radar site in the Lower Athabasca region of Alberta.

The first radar was installed at Radisson SK and officially announced on November 15, 2017 by MSC’s then Assistant Deputy Minister (ADM), David Grimes (Figure 2). The project remains on schedule and on budget with 4 additional radar installations completed in 2018 at Blainville QC, Foxwarren MB, Smooth Rock Falls ON, Spirit River AB. Replacement of 7 radars is underway for 2019. As this manuscript is drafted, construction of four of the 7 is complete with the remaining 3 well underway. As of early September the new radars at Exeter ON, Bethune SK, Marion Bridge NS and Chipman NB have been calibrated and are in their burn-in stage before the final site acceptance testing. Replacement of 7 radars per year is planned for the remainder of the project.

This paper provides an overview of the CWRRP project; the advantage and benefit of the new technology, and some data and products the new radars start to offer.

Advantage and Benefit of the New Radar Technology

The new and state-of-the-art radars will have fully integrated dual-polarization technology, which will enable forecasters to better distinguish between rain, snow, hail, and freezing rain as well as better discern the size, shape, and variety of precipitation particles. This technology will also enable better identification and removal of non-meteorological targets such as birds, bugs, and debris from the data. As a result, the meteorologists will be able to issue more precise and timely weather watches and warnings for significant weather events, giving Canadians more lead time to take appropriate actions to protect themselves, their family, and their property from the effects of severe weather.

As demonstrated in Figure 3, a case showing a severe thunderstorm with hail reports in Manitoba on June 5th 2019 (Foxwarren Radar), the Dual Pol data are able to distinguish and detect different types of echoes, identify potential areas of hail in the classification products, and improve quantitative precipitation estimates (QPE).

A key difference with the new radar network is the extension of the Doppler range from the old radar’s 113 km to the new radar’s 240 km. This will both increase the ability to detect severe weather and increase the overlap with neighboring radars in case of outages.

Figure 4b depicts a scenario when the network is completed. The Doppler coverage will increase to 4,047,800 km2.The green circles in Figure 4b indicate the radars completed so far. The blue circles indicate radars to be replaced in the same location. The orange circles indicate new locations (this includes the new radar in the Lower Athabasca region, and planned relocations of 3 sites (two DND radars and the Vancouver Island radar).

The new S-Band radars have higher power and reduced attenuation compared to the old C-Band radars. This allows for much better “storm penetration” performance. The radar is able to pierce through or “see” deep into dense weather systems and even beyond to see severe weather developing behind a large storm cell. This is an important feature especially in detecting storms that present a high flooding risk.

In addition, the scan cycle of the new radars is shortened to 6 minutes from the 10 minutes of old C-Band radars. A more rapid scan is essential for issuing timely warnings as well as being very important for data assimilation for nowcasting.

The improved weather-data quality will also allow for more effective use of the information in other areas, such as water management, as radar images are used to understand the effects of precipitation on drainage basins, in particular in support of flood forecasting by provinces.

One of the big features with the newer radars will be a significant reduction in maintenance costs as well as the time associated with maintenance. The old system requires the radars to be taken offline bimonthly for maintenance with a longer duration outage for the “annual” maintenance. New radars will require only 2 semi-annual maintenance visits. This will lead to greater availability of the radar data. Maintenance is provided by Selex (Leonardo) during the warranty period.

The contract with Leonardo provides for a commercial-of-the-shelf product with the contractor responsible for the complete construction from foundation to operational status. With the five radars operating in 2018, there were challenges associated with technical issues which led to several unexpected radar outages. Some of these issues were repeated at other radars. To address this, the contractor initially stabilized the technical issues with temporary measures while permanent solutions were developed. These permanent solutions have now been rolled out to all the new radars. Uptime for the new radars since the countermeasures were employed is near 100%.

Starting in 2019, an ambitious plan of seven radar installations per year for the balance of the program is underway. The seven radars being replaced in 2019 are Bethune SK, Exeter ON, Marion Bridge NS, Chipman NB, Landrienne QC, Montreal River Harbour ON, and Strathmore AB. Selecting which radar is to be replaced in any given year by ECCC and the timing of the construction by the contractor is a balancing act between competing priorities. These include current operational status, climate and local severe weather frequency, location, access and the status of consultations and approvals. As the schedule is developed, it is updated on the project website at https://www.canada.ca/en/environment-climate-change/services/weather-general-tools-resources/radar-overview.html

In 2019, a radar construction timeline is 20 weeks at a minimum (Figure 8), including foundation work, tower construction, radar installation, establishment of power and telecommunication, new radar calibration and commissioning, burn-in and Site Acceptance Test (SAT). The 30-day burn-In phase allows for final work and tests to enable a smooth SAT. During the burn-in period, test data will be sent to a server within ECCC for data quality assessment and user evaluation. Data flows to the internal operational servers and to external sites and clients once SAT is complete.

Replacement of the seven radars in 2019 is underway. As the manuscript is drafted, Exeter ON, Bethune SK, Marion Bridge NS and Chipman NB had entered their burn-in stage before the final site acceptance tests.

Collaboration with key enablers is essential to ensuring a successful project delivery. These include contract monitoring; IT infrastructure; radar data and processing software adaptation; development of new Dual-Pol products; radar system and data quality control; as well as providing data and product services to internal and external clients (Figure 9).

Key project enablers and stakeholders include:

Understanding the new S-Band radar system and improving the quality of radar data and products is a priority for ECCC, both from a hardware and a software perspective. The new system needs to be tested in different weather situations and user feedback is critical to identify potential issues. Radar experts and scientists from the Science and Technology Branch (STB) of ECCC have been leading the data piece and working collaboratively with CWRRP, the manufacturer (Leonardo), academia, the data processing team and radar users to develop a better understanding of radar signal processing, to improve scan configuration, data quality, and to develop new products.

Where to See the New Radar Data and Products

Data from the new S-band radars is made available at the successful end of the Site Acceptance Testing. Products from the new radars can be found on ECCC’s Weather.gc.ca website (Figure 10) and datamart (dd.weather.ec.gc.ca).

In addition, a higher resolution 1km composite radar animation is available on a zoomable map background within ECCC’s “WeatherCAN” smartphone app and on GeoMet. More products will be rolled out as the project proceeds.

External data to radar clients are available in ODIM_H5 format and products from the new radars are now available on many 3rd party apps such as RadarScope (Figure 11).

Sylvain Laramée joined Environment and Climate Change Canada in 2003 and occupied several management positions in the Environmental Protection and Operations Division before joining the Meteorological Service of Canada in 2012. He worked as the Regional Manager, Atmospheric Monitoring for Quebec Region and as Senior Manager for Regional Operations also for Atmospheric Monitoring. Since 2017 he is the Director for Canadian Weather Radar Replacement Project. He holds a second degree diploma from the University of Sherbrooke in Environmental Management. 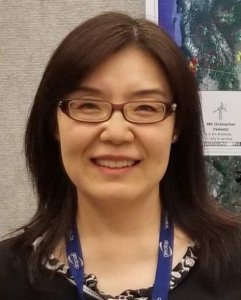 Qian Li joined CWRRP in 2017 before the commissioning of the first new radar at Radisson, Saskatchewan. Her role as Science Liaison Officer is to liaise with radar scientists from ECCC’s Science and Technology Branch, as well as radar data integration team to ensure the successful delivery of the new radar data and products to downstream applications and users. She started her career within Environment Climate Change Canada in 2002 and holds a Bachelor of Science Degree in Geophysics from Peking University, and a Master of Science Degree in Atmospheric Physics from Chinese Academy of Meteorological Sciences.