Into the burgeoning field of climate change novels we receive Burning Souls, by former Ottawa City Councillor David Chernushenko. This book is different. Do not pick it up unless you’re prepared to stay up late finishing it. 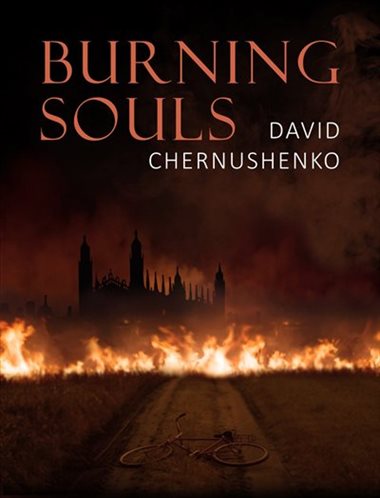 Chernushenko has a notable pedigree as an educator, film-maker, and author. His service on the council of the City of Ottawa included being Chair of the Environment and Climate Protection Committee. That breadth of background knowledge shines through in this novel.

Crafted around the adventures of four optimistic Cambridge graduate students, Burning Souls is well-paced and compelling. The principal characters – Sagan, Jenny, Jiro, and Simone – develop interests and careers in climate science, business, and journalism. Each are well developed and their stories form an excellent narrative that underpins the novel.

Chernushenko manages to join all the dots between the symptoms and events of the growing crisis, tracing an arc from the ‘Lost Decade’ of the 1990s to a nail-biting finale in the mid-2020s. He brings a wealth of accurate information, garnered during his career interest in climate change and responsible life style. His insight into the Machiavellian intrigues within politics and commerce are frightening enough, but his predictions of the course of events in the world at large will take away what little sleep you might have hoped for.

Novels in this genre are necessarily didactic and portentous. Chernushenko however navigates this with panache, speaking through his characters with precision and depth. The multifaceted dark sides of our society are exposed to the searing light of consequence. Given the news each day (“Humans threaten one million species with extinction”; “Nature’s emergency in five graphics”; “Five things we have learned from the nature crisis study”, — just to look at the one news site in the past week!) together with the increasing number of declarations of “climate emergency” by governments and school children around the world, his illumination is timely and sobering.

An intriguing thread throughout the novel is the many references to an encyclical published by Pope Francis in 2015 – Laudato si: On Care for our Common Home. This oft-overlooked work is a lucid account of the harm inflicted on the earth by our irresponsible use and abuse of the goods with which God has endowed it. Whatever one’s spiritual outlook, the theme merits careful attention – especially in light of the generations of exploitation justified by a misinterpretation of the injunction to “fill the earth and subdue it”. Apocalyptic fatalism and its ties to Fundamentalism – as Atwood’s Handmaid’s Tale so aptly cautions – have long served as an excuse for capitalistic greed. It is a bankrupt philosophy that demands more vigorous confrontation (as indeed some apologists in addition to Pope Francis are attempting, such as David Bookless, Ontario native Katherine Hayhoe, Director of the Climate Science Center, or Wendel Berry).

Chernushenko explores the redemptive power of acting with courage and integrity and the value of close friends in the face of critics and opponents, but ultimately comes to the same position as many mythopoetic authors before him: a physical extermination of evil is the only remaining option. Will the travails of his characters compel us to the same position? Do we have the courage of Simone to take up those arms? The arc of history traced in this novel may portend only one conclusion.

From 1998-2013, Frank Johnson managed his company RBR Ltd. RBR has been a long-time Corporate Member of CMOS and frequently exhibits at Congresses. He is now president of Ottawa Instrumentation Ltd., and continues to be involved in development of sensors for oceanography and sleep apnoea recording. Frank is an active member of CMOS and spoke at the January 2019 Ottawa Centre lunch meeting on Citizen Scientific Tourism on an Unexpected Circumnavigation of Baffin Bay.