Climate Clock: Running Out of Time?

Climate change is an increasingly urgent issue, with a significant amount of people working towards mitigation. However, the majority of the global population is not yet actively participating in climate action. This inaction may be due to several factors, such as inadequate climate communication, a perceived consensus gap among scientists, confusion or lack of understanding of the severity of climate change and its anthropogenic causes, and a lack of understanding of what we can do in our own lives to mitigate climate change. The Climate Clock was developed at Concordia University and the Human Impact Lab as a tool to help fill the gap between science and the public consciousness. The clock shows the time until we reach 1.5 to 2°C of global warming above pre-industrial averages, the thresholds beyond which catastrophic climate events will likely occur with increasing regularity. The clock conveys the progression of climate changes using the easily understood metric of time, allowing us to visualize and think about the potential impacts that global warming will have on their lives, or the lives of our loved ones. Collective action is required to solve this problem, and the climate clock will track our progress.

Time is something we all understand. As each of us go about our daily lives, worrying about more immediate and personal issues, climate change is progressing at an accelerating rate. While many areas around the world have begun to feel the effects of climate change via extreme weather events, floods or wildfires, the majority of the global population has likely not seen any major effects of climate change on our day-to-day lives. This incomplete perception of risk is compounded by low awareness and understanding of the potential consequences of climate change, and is exacerbated further by the outright denial of the problem as currently demonstrated potently (though not exclusively) in US politics. The result is that we have not yet fully embraced the need for immediate and stringent action to decrease greenhouse gas emissions and eliminate our dependence fossil fuel energy.

The Climate Clock was developed by the Human Impact Lab in collaboration with Concordia University in Montreal to bring the climate challenge out of the abstract sphere of science and politics, and into the public consciousness. Framing the problem in units of time, makes it something that we can intuitively understand; the clock acts as a line in the sand that we can identify with, and that can track our progress towards meeting the goals of climate mitigation.

Given current global and national ambition to limit global warming to no more than 1.5 to 2°C above pre-industrial averages, the Climate Clock shows our best estimate of when global temperature will reach 1.5 and 2 °C above these temperatures, assuming global CO2 emissions continue to increase following the observed trend of the past five years. The clock shows three numbers: (1) “Tonnes of CO2 emitted”, which represents the total accumulated CO2 emissions from fossil fuel burning, cement manufacture and land-use change since 1870; (2) “Global warming to date”, which represents the human contribution to global temperature increases since 1861-1880, based on a recently-developed Global Warming Index that estimates the portion of observed temperature change that can be attributed to all human drivers of climate change; and (3) “Time left to 2 °C”, which is based on extrapolating the most recent 5-year trend of global CO2 emissions (which increased by 0.56% per year during 2012-2017) until we reach the total allowable emissions of 3500 billion tonnes of CO2 emissions; and (4) “Time left to 1.5 °C”, which identifies the time that 1.5°C is crossed on the trajectory towards the 2°C climate threshold. As of December 2017, we have 15 years remaining until we reach 1.5°C of global temperature increase, and 27 years remaining to 2°C. With each year’s new emissions data, we will update the clock, allowing us to evaluate our progress or lack of progress in efforts to curtail climate change.

In 2017, I carried out an undergraduate research project, entitled Running out of time: Using a climate clock to communicate the urgency of climate change. I was concerned with the general lack of concern about climate change that I have perceived in the people around me. My research project aimed to bridge science and community knowledge in order to understand: (1) how aware people are on the subject of climate change and why they are not more concerned about it; (2) to what extent people engage in environmentally-friendly behaviors and what barriers are the most important in preventing climate action; and (3) how effective the climate clock is as a tool for communicating the urgency of climate change to a broad range of people. My research found that some of the barriers to sufficient concern for climate change among respondents were inadequate climate communication, a perceived consensus gap among scientists, confusion about the severity of climate change and its anthropogenic causes, and most importantly, a lack of understanding of what they can do in their own lives to mitigate climate change. The majority of my respondents reacted very strongly when shown the Climate Clock, revealing emotional responses that included fear, shock, anger and sadness; yet they did not know how to do their part for climate action. Many felt lost.

The Climate Clock is therefore an extremely powerful communication tool, providing a visceral view of the progression of time towards the climate targets that we are trying to avoid crossing. The clock shows us the urgency of climate action, but it is up to us to find ways to implement the action that is needed. We need to educate ourselves on what we can do personally, as well as on how we can use our own personal and professional spheres of influence to motivate change in those around us. Every single human being on Earth will be affected by climate change. To avoid the more serious consequences on the horizon, we need to act now, together. 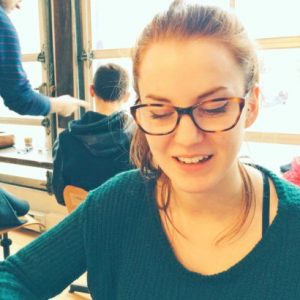 Samantha Mailhot holds an honours degree from the Department of Geography, Planning and Environment at Concordia University, where she worked with Dr. Damon Matthews, Professor and Concordia University Research Chair in Climate Science and Sustainability. Her interest in environmental issues began at the beginning of her university degree, and has grown significantly as she progressed in her education and research. She plans to continue studying climate science and communication as a graduate student and hopes to contribute to our understanding of what science communication strategies are most effective to motivate climate action.