It is with great sadness that we announce the death of Dr. Louis Fortier in Quebec City, on the 4th of October at the age of 66, following a courageous fight against leukemia. He was the son of Pierre Fortier (1923-2012) and Louise Roy (1925-1989).He is survived by his partner, Leah Braithwaite, who supported him throughout his final journey, his children Benjamin and François and their mother Brigitte Robineau; his brothers and sisters, Marie-France (Richard Guay), Pierre (Marie-France Garnier), Robert (Sylvie Boivin), and Dominique (Stefanos Roussos); his nephews and nieces Christophe and Ariane Fortier-Guay, Frédéric and Olivier Fortier, his beloved aunts Camille Roy-Harnois and Aline Fortier, as well as many cousins, friends and colleagues, both in Canada and around the world. 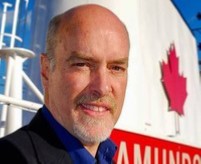 Louis grew up on the bank of the St. Lawrence River and this was a profound influence on his worldview and interests. He was driven by a curious and inquisitive mind, a fiery and passionate nature and an insatiable desire to understand the fragility of the world around us. These qualities led him to traverse the remote high Arctic seas with students and colleagues from around the world to comprehend and focus attention on these vulnerable marine ecosystems. Throughout his career, he was at the forefront of understanding and demanding action on climate change. His conviction was absolute and his message remains more crucial than ever.

His vision was informed by the most rigorous science and his leadership led to the creation of a ship he loved and a research community that encompassed all aspects of the North. He was Scientific Director of the Quebec-Ocean Strategic Cluster when it was founded (2002-2005), the ArcticNet pan-Canadian Network of Centres of Excellence (2001-2019), the research icebreaker CCGS Amundsen (2002-2020), and most recently, the Institut nordique du Québec (2016-2019). He devotion to science and commitment to communicating the results of research earned him, among others, the Order of Canada (2007), the Ordre national du Québec (2008), named scientist of the year by La Presse, Le Soleil and Radio Canada (2004-2005-2008), the Governor General’s Medal for Northern Affairs (2014) and Knight of the National Order of the French Legion of Honour (2017).

With a prolific research career, he held the Canada Research Chair on the Response of Arctic Ecosystems to Global Warming (2004-2020), led NSERC
Strategic Networks such as NOW (International North Water Polynya Study) and CASES (Canadian Arctic Shelf Exchange Study). With close University of Laval colleagues, he established the Canada Excellence Research Chair in Remote Sensing of Canada’s New Arctic Frontier. Over the years, he has trained dozens of students and wrote numerous scientific and lay publications. He was an ardent promoter of the decompartmentalization of science and international cooperation, following to the letter the spirit of his childhood bedside book “Tintin and the Mysterious Star” by Hergé.

An accomplished classical guitarist, a lover of life, hunter and fisherman in the company of his sons and close friends, an epicurean at heart and of great generosity, he has touched in a special way those who have been close to him through his endearing and uncompromising personality. For us, his family, he will forever remain Louis, the father, the spouse, the brother, the brother-in-law, the son, the uncle, the nephew, the cousin who always came back from far away, made us travel to unknown lands and live adventures, each one more hectic than the other, and which we love deeply. He landed the grand three-masted ship that carried him to his final rest, but the moorings of the CCGS Amundsen will continue to be cast off, and his memory will continue to sail in the wind and waves of the Far North.

Your expressions of sympathy can be translated into a donation to Leucan – the Association for children with cancer or Canadian Parks and Wilderness Society: CPAWS. Given the restrictions linked to the Covid-19, a ceremony will be held in the strictest privacy. Condolences can be sent to Lépine Cloutier funeral home.