Growth of the BC shellfish aquaculture industry has fallen behind the provincial government’s 1997 projections. While the impact of farming density is under investigation, changes in carbonate chemistry due to ocean acidification have been shown to reduce growth and survival, particularly in juvenile shellfish. We cannot yet evaluate changes in pH over time in the Strait of Georgia, however the Strait is acidic relative to the northeast Pacific Ocean at present and harbours seawater below 20 m that is potentially corrosive to shellfish. Researchers at the University of British Columbia are investigating the role of wind-driven upwelling in transporting these corrosive waters into farmed shellfish habitats, particularly in the Baynes Sound and Discovery Islands regions, using the SalishSeaCast marine forecast model. According to the model, along-strait winds from the south can cause seawater from the corrosive layer below 20 m to flow into the Baynes Sound region. It remains to be seen how frequently intrusions like this occur in the region and how long reduced pH conditions may persist where shellfish are grown. The SalishSeaCast model will help answer these question as its carbonate chemistry module is developed.

On the southern British Columbia coast, the protected waterways of the Strait of Georgia host over 80% of the 400+ shellfish farm leases in Pacific Canada [DFO Aquaculture Management Division, 2016]. The shallow, tidally flushed shorelines and passages, particularly in the northern Strait, provide often ideal conditions for raising several shellfish varieties including oysters, clams, and mussels. Since 1998, a steady expansion of the number of farm leases in and around the Strait has been underway [Silver, 2014]. However, despite a 2015 harvest of 11,000 tonnes and over $57 million in wholesale value [BC Ministry of Agriculture, 2016], these numbers fall nearly 50% short of the provincial government’s 1997 projections when the initial lease expansion began [Silver, 2014].

While a variety of ecological mechanisms attenuating shellfish farm productivity may arise from increased farming density [Bendell-Young and Ydenberg, 2001], changes in the seawater carbonate chemistry of the Strait of Georgia habitat may also play a role. Rising ocean dissolved inorganic carbon (DIC) due to increased CO2 uptake from the atmosphere is causing ocean pH to decline (ocean acidification, [Byrne et al., 2010]), and the negative effects of this decline on marine organisms and ecosystems have been increasingly explored over the past decade [Haigh et al., 2015]. Shellfish are particularly vulnerable to this decline because rising DIC also lowers the saturation state of aragonite, a mineral form of calcium carbonate used especially in juvenile shellfish [Waldbusser et al., 2015].

For the Strait of Georgia, it is unclear whether ocean acidification is affecting farmed shellfish habitats or not. In fact, DIC is higher in the deep Strait of Georgia, due to local carbon retention, than in the northeastern Pacific Ocean water that annually flushes the Strait [Ianson et al., 2016]. However, this same local carbon retention produces low pH (< 8.0), aragonite-undersaturated waters below a strong, shallow (20 m) gradient throughout the spring, summer and fall [Moore-Maley et al., 2016]. These waters could be a source of environmental stress for, and potentially corrosive to, shellfish if they flow through farmed areas.

In lakes of comparable scale and dimension to the Strait of Georgia, wind-driven upwelling is capable of displacing water masses near the shore by 20 m both along basin sides (e.g., Lake Ontario, [Csanady and Scott, 1974]) and at basin ends (e.g., Kootenay Lake, BC, [Stevens and Lawrence, 1997]). However, increased stratification and tides make characterizing the wind-driven upwelling in the Strait more complicated than in lakes. Furthermore, the overwhelming majority (80%, [DFO Aquaculture Management Division, 2016]) of farm leases in the Strait of Georgia are concentrated in Baynes Sound (like the site shown in Figure 1) along the central eastern coastline of Vancouver Island, and in or near the Discovery Islands (like the site shown in Figure 2) at the northern end of the Strait (Figure 3), both of which are topographically isolated zones of significant tidal influence.

The Mesoscale Ocean and Atmospheric Dynamics (MOAD) group at the University of British Columbia is investigating the link between wind-driven upwelling and nearshore carbonate chemistry in the Strait of Georgia using the recently developed SalishSeaCast marine forecast model (https://salishsea.eos.ubc.ca/nemo, Figure 3). The project is part of the Integrated Coastal Acidification Program (I-CAP) supported by the Marine Environmental Observation, Prediction And Response (MEOPAR) Network of Centres of Excellence of Canada. SalishSeaCast is built on the NEMO 3.6 ocean model [Madec, 2016] and was first deployed as a MEOPAR-funded, storm surge forecast model for low lying municipalities in the southern Strait [Soontiens et al., 2016]. The project has since grown into a 3+ year hourly record archived by the MOAD team (https://salishsea.eos.ubc.ca/erddap ). 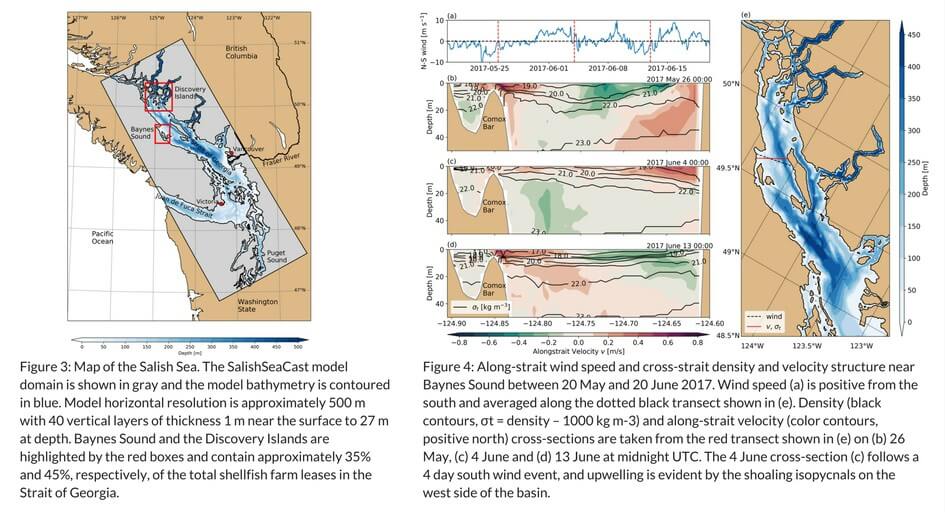 The Strait of Georgia is wide enough for rotational dynamics to affect the water column response to wind forcing. Thus for along-strait winds blowing from the south, there is a cross-strait tilt in the near-surface pycnocline and upwelling along the Vancouver Island coastline. One such wind event occurred in the SalishSeaCast record near Baynes Sound at the beginning of June 2017 (Figure 4). In late May and mid June, the 1022 kg m-3 cross-strait density surface, corresponding approximately to the 20 m isobath, was nearly flat (Figure 4b, d). Based on recent observations [Ianson et al., 2016] and modelling [Moore-Maley et al., 2016], the 20 m isobath roughly corresponds to the strong chemical gradient separating the surface from the low pH (< 8.0), aragonite-undersaturated water below. On June 4 following a 4 day wind event from the south (Figure 4a), the cross-strait pycnocline tilted significantly and the 1022 kg m-3 density surface appeared to begin spilling over Comox Bar into northern Baynes Sound, as evidenced by the shoaling isopycnals on the western side of Comox Bar (Figure 4c).

Such wind events originating from the south are more characteristic of winter than summer. Shellfish stocks may be more resilient to winter disturbances since the primary growing season for juveniles is spring and summer. However, as the June 2017 example illustrates, these south wind events are not isolated to winter and can occur during any season. What remains to be determined is how frequently and how significantly these types of events influence the water properties of regions like Baynes Sound and the Discovery Islands. These areas may turn out to be protected from upwelling by tides, bottom topography, or nearby rivers. Alternatively, they may turn out to be hotspots for upwelling sensitivity, which could explain some of the deficit in projected industry growth. Either way, if wind driven upwelling does turn out to be a source of environmental stress for farmed shellfish, forecast models like SalishSeaCast may be able to provide a solution for shellfish farmers to avoid putting their stock in harm’s way. The MOAD Salish Sea team is currently developing a carbonate chemistry model coupled to SalishSeaCast for the purpose of forecasting pH and aragonite saturation state in areas like Baynes Sound and the Discovery Islands.

Acknowledgements: This work is funded by MEOPAR and an NSERC Discovery Grant. We would like to acknowledge the contributions and ongoing work of recent MOAD Salish Sea team members, especially Doug Latornell for implementing the automation, forecasting, collaboration, and software development frameworks, Michael Dunphy, Nancy Soontiens and Jie Liu for their roles in developing the model physics, Vicky Do for her ongoing upwelling simulations, Elise Olson for her development and evaluation of the biology model, and Tereza Jarníková for her ongoing development of the carbonate chemistry model. We would also like to thank our partners in the shellfish industry: Keith Reid of Stellar Bay Shellfish, Yves Perrault of Little Wing Oysters, Andre Comeau of Okeover Organic Oysters and Andrew Dryden of Evening Cove Oysters.

About the Author: Ben Moore-Maley 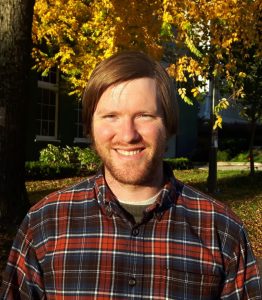 Ben is a PhD candidate with the MOAD Salish Sea team at the University of British Columbia. He is using the SalishSeaCast model to study how wind-driven currents and upwelling in the Strait of Georgia impact seawater carbonate chemistry and oil spill trajectories.