A New Option for at Sea Canadian Ocean Science?

The Canadian Coast Guard’s ability to support Canadian Ocean Science with ship time and facilities has been and will continue to decline even after the anticipated new science ships enter service in the coming years. It is hoped that this could be alleviated with the upcoming delivery of the versatile Arctic/Offshore Patrol Ships to the Royal Canadian Navy beginning in 2018.

To this end, the Canadian Scientific Submersible Facility has been promoting discussions between the Navy, Fisheries and Oceans Canada, Natural Resources Canada, academic scientists, Natural Sciences and Engineering Research Council, Defense Research and Development Canada, Networks of Centres of Excellence, Non-Governmental Organizations and many other related groups. Our two-part goal is the development of a four-week ocean science demonstration trial aboard a Patrol Ship as early as possible, followed by a proposed five-year Canadian Ocean Science plan to make full use of available ship time and facilities aboard Canadian Naval and Coast Guard vessels on all three coasts.

Introduction: A New Option for at Sea Canadian Ocean Science?

Increasingly limited access to ship time for Canadian Ocean Science has created difficulties for many years, but is now becoming even more problematic. Most ship time has been provided aboard Canadian Coast Guard (CCG) vessels, which attempts to fulfill its mandate while dealing with the maintenance and coordination problems of operating an aging fleet. Capacity is eroding before replacement. Ships are not being replaced one-for-one. These problems are affecting all three coasts, but are especially notable, and potentially critical, in the Arctic. Reduced availability of CCG ships is a threat to all Canadian Ocean Science researchers who rely on this sea time.

It is suggested that a significant contribution to Canadian Ocean Science could be made by the Royal Canadian Navy (RCN) supporting science missions with ship time and facilities aboard the soon to be launched HARRY DEWOLF-Class Arctic/Offshore Patrol Ships (AOPSs) with delivery of up to six vessels scheduled to begin in 2018.

We hope that government leadership in ocean science, specifically Fisheries and Oceans Canada (DFO) ADM Science, and Natural Resources Canada (NRCan) ADM Lands and Minerals, will be convinced that this is a sound idea worth evaluating with a pilot project conducted in the summer of 2019. The potential availability of time and facilities aboard these ships will hopefully lead to Canadian Ocean Science academics developing collaborations with DFO and NRCan scientists to take advantage of any available ship time.

Access to reliable CCG ship time for ocean scientists has been steadily declining for years. There are several key causes; a science support fleet that has been aging for decades, DFO Ocean Science structural deficits, and slowly declining Natural Sciences and Engineering Research Council (NSERC) Ship Time Allocation Committee (STAC) funding. These problems have recently begun to accelerate on all three coasts.

Concurrently, demand for ocean science support has been increasing and is likely to continue to do so. For instance, growing pressure to establish new Marine Protected Areas on all coasts will require extensive ocean science studies to identify optimum locations. Once established, longer-term monitoring programs will be required to demonstrate and ensure their levels of effectiveness.

While new science-capable ships are currently being constructed for the CCG, there will be significant loss of capacity in the interim, until all the required replacement vessels are in service. It should also be noted that any CCG ships assigned to science missions are periodically re-assigned to real world Search and Rescue and other tasking, displacing science missions. Current challenges by region include:

Atlantic: CCG ships that support science have been retired, or are close to retiring, and are increasingly not available for ocean science service. Examples include:

Pacific: One key CCG ship that has supported ocean science has just retired, leaving little other capability, especially for fisheries science. Examples include:

Arctic: Activity in the Arctic is increasing and expanding our ocean science presence is crucial. CCG ships include:

With the RCN taking delivery of up to six ice-capable AOPSs (or Arctic and Offshore Patrol Vessels; AOPVs) starting in 2018, new ocean science platforms may become available.

The AOPS’s mandate will include:

The last statement means that if DFO and NRCan (and other departments) request support from the RCN for ocean science, this could be made available “as opportunity allows”. In addition, they could also support academic ocean science missions if those scientists were in collaboration with DFO (possibly through their Partnership Program) and/or NRCan researchers.

Highly versatile, AOPSs could become outstanding ocean science vessels of opportunity. This belief could be easily tested in a four-week trial deployment in 2019. As an example, the following could be readily embarked:

Benefits for the RCN/Canadian Forces

These ships, outfitted with appropriate research equipment including state-of-the-art ROVs and/or AUVs, could also provide a comprehensive deep seabed intervention capability for the RCN that has been lacking for decades, as well as the opportunity to maintain continuing experience in this and related fields. It would restore RCN expertise and develop experience with deep seabed intervention operations.

This opportunity could also be used to restore RCN experience with deep sea Search and Recovery, and provide a contingency seabed intervention capability.

CSSF has been supporting this initiative in discussions at all levels of DFO, NRCan, and RCN; as well as with academic scientists, NSERC and DRDC, and will continue to do so. A current priority is the development of a four-week ocean science demonstration trial aboard an AOPS operating out of Halifax, NS as soon as possible after the completion of ship trials.

This entire process could be initiated if the DFO ADM Science and NRCan ADM Lands and Minerals were able to meet with The Commander of the RCN to develop and sign a formal Memorandum of Understanding among the three groups. DFO and NRCan would then be able to have their scientists assemble consortia of ocean science research groups that would include university academics, NSERC and DRDC.

Led by DFO and NRCan, these groups could then work together to develop a five-year proposed Canadian Ocean Science plan with full participation by academics, DRDC, and interested NGOs. Recognised Networks of Centres of Excellence (NCEs) and related entities including the Marine Environmental Observation Prediction and Response Network (MEOPAR), Ocean Networks Canada, Takuvik, ArcticNet and the Ocean Frontier Institute should also be engaged and may in fact wish to play a key science leadership role. Participation of the DFO Partnership Fund and NSERC STAC would be critical for the funding of mission-related incremental costs.

CSSF is not alone in recognizing this problem and envisioning solutions. Of note, a team of academics led by MEOPAR Scientific Director Douglas Wallace have developed a concept known as Modular Ocean Research Vessels (MORV). MORV will use existing, non-specialized vessels to embark science teams with containerised labs and support modules. They have identified several candidate ships in Halifax and St John’s and are working to further develop this concept, with a trial expedition, using a platform supply vessel, as early as August/September 2018 to test both MORV and AOPS concept of operations while conducting quality ocean science. Science would include various water column and seafloor biogeochemistry and monitoring studies with a ROPOS mission focusing on deep ocean microbiology studying hydrocarbon-degrading microbes.

The ability of the CCG to support Canadian Ocean Science is continuing to decline and significant shortfalls will still occur after delivery of the new science ships. Any ship time “as opportunity allows” that may become available aboard an RCN AOPS could and should to be fully exploited to achieve their full mandate while promoting all possible aspects of Canadian Ocean Science.

The future is what we make it.

About the Authors: Douglas Bancroft and Donald Reid

Douglas Bancroft is a former Commanding Officer of several RCN ships, who has also enjoyed three decades in senior leadership positions in DFO, Environment Canada (EC) and NRCan science. He is currently President and CEO of the Canadian Scientific Submersible Facility (CSSF). He has observed first hand the alarming and accelerating decline of CGG capacity to support Canadian ocean science over the last decade, and developed this concept as an option to substantially mitigate this situation. 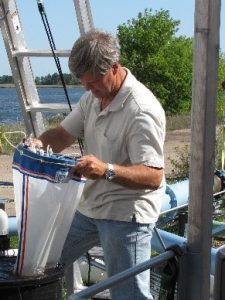 Donald Reid has worked in ocean sciences for more than four decades as a marine/aquatic biologist studying coral reefs, crustacean reproduction, fisheries management, and the transport and control of aquatic invasive species. He has been a co-ordinator/advisor for various programs and projects with EC, DFO and TC, including the CCG.