Written by CMOS Bulletin SCMO on May 18, 2019. Posted in Atmosphere, News & Events, Space.

Dr. Wayne Evans, Adjunct Professor in the Centre for Research in Earth and Space Science (CRESS) at York University from 1976 onwards, passed away in Seattle, Washington on April 27th, 2019. Although he never held a faculty position at York, during his time at Environment Canada and Trent University he maintained continued collaborations with CRESS, and contributed a great deal to its research activities. 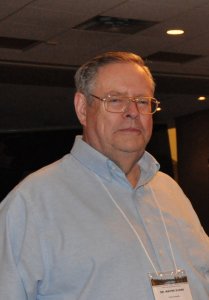 Wayne F. J. Evans was born in Saskatchewan and received his B.A. (Physics) in 1961, at the University of Saskatchewan, followed by an M.A. (Physics) in 1963 and a Ph.D. in 1968. In 1997 the University added the prestigious D.Sc. After getting his Ph.D in 1968, Wayne joined the new Department of Environment (Atmospheric Environment Service), spending the next two decades there doing much groundbreaking research. He was a Research Scientist in the Experimental Studies Division from 1972 to 1976, and Chief of the Environmental Studies Division from 1976 to 1990. He then became Professor of Environmental Science, 1990 – 2006, at Trent University in Peterborough. After that he retired to Seattle, Washington, U.S.A., where he collaborated with NorthWest Research Associates in Redmond. During all of this time, he maintained a strong interaction with York University as an Adjunct Professor from 1976 onwards. As part of this he was co-supervisor, with John McConnell, of Ph.D. student Chris Sioris, now at Environment and Climate Change Canada. As well, while at EC he taught an undergraduate EATS (Earth and Atmospheric Science) course at York University, and part of one graduate course. He was a co-supervisor for Ph.D. students Paul Shepherd and Chris Sioris.

Wayne had a lengthy association with CMOS. He was a member for at least 45 years. He won the 1976 President’s Prize for his important contributions to the AES Stratospheric Pollution program (Project STRATOPROBE) both as a member of the program and in communicating the results which appeared in a special issue of Atmosphere. He was Chair of the Toronto Centre in 1989 and 1990, and was on their executive as a Member-at-large from 1997 to 2008. He also attended numerous Congresses presenting research results. The photo shows Wayne at the 2013 Congress in Saskatoon.

While still at the University of Saskatchewan, he participated in perhaps the first atmospheric balloon launches in Canada. That scientific package was small enough to be carried by a fast runner, Stephen Peteherych perhaps, before releasing it. This laid the groundwork for his first projects at the Atmospheric Environment Service within EC where he initiated the STRATOPROBE project; large balloons for measurements of the stratosphere, well ahead of its time. In STRATOPROBE I, ozone was studied, well before the ozone hole was discovered. The first flight was in 1974 and was flown at 35 km altitude, measuring HNO3, NO2, NO and O3. Half of the experiments were provided by AES and the other half by Canadian universities. Chlorine components were added in STRATOPROBE II, one year later. In 1996 chlorine and nitrogen were measured during STRATOPROBE III.

In 1984, Canada’s first astronaut, Marc Garneau, flew on space shuttle mission STS 41-G, conducting ten Canadian experiments, including SPEAM (Sun Photometer Earth Atmosphere Measurements), led by Wayne Evans in collaboration with CRESS at York University. In 2001, Canada provided an instrument called OSIRIS (Optical Spectrograph and Infra Red Imaging System) on the Swedish Odin satellite, in which Evans played a significant role. In 2003 the ACE (Atmospheric Chemistry Experiment) on the Canadian SCISAT satellite was launched, which measured a wide variety of different species and is still measuring them today. Again Wayne Evans was much involved. For these activities, he became a Fellow of the Royal Society of Canada in 1989.

The Canadian Wind Imaging Interferometer (WINDII) was launched on NASA’s Upper Atmosphere Research Satellite (UARS) in 1991 with Evans as a co-investigator. Here he led in the study of Polar Mesospheric Clouds, high altitude (82 km) clouds in the high-latitude summer atmosphere. These are formed from water vapour in the very cold atmosphere at this season and latitude.

He is the author of over 200 publications with 138 in peer reviewed journals. He was a reviewer of the IPCC 2001 and 2007 Assessment Reports and was an expert on the interaction of the energy industry with the Kyoto accord. It is clear from this record that he was an energetic and insightful atmosphere scientist that supported major Canadian space activities, and transmitted that enthusiasm to many students who fondly remember him at this time.