The Weather Machine: A Journey Inside The Forecast

Quite by accident I stumbled upon this book in the express collection of the Ottawa Public Library. Seeing it was about weather forecasting, I could not resist it. After reading the short book, I am amazed it was not sent to the CMOS Office like so many other books offered for review in the Bulletin. The Weather Machine is at the core of what meteorologists past and present do, and should be a pre-requisite for any undergrad or grad course in meteorology. 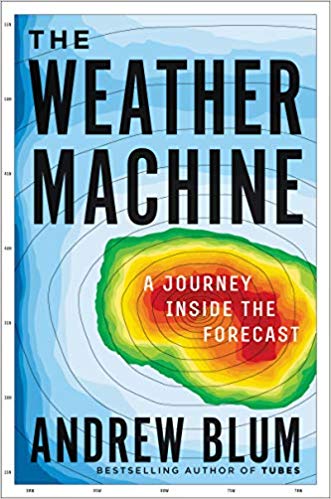 Andrew Blum is no stranger to CMOS. At the beginning of this summer we linked an article on our social media, published in Time Magazine, called Inside the Weather Wars That May Threaten the Daily Forecast You Depend On. It should still be available at: https://tinyurl.com/y34u2rob

The Weather Machine was referenced there. Blum’s book traces the history of meteorology, first with historic primitive observing all the way to producing a usable forecast. Later chapters cover the current state of the science which includes global model ensembles and the newest crop of orbital and stationary weather satellites. Canada and its met services are not ignored but the state of the art physics and world class numerical weather prediction we did under experts like Warren Godson and André Robert should have been mentioned. The end of the book references CMOS members Bruce Angle and David Grimes. The book concludes with an interview with David, retiring as Head of the World Meteorological Organization, who gives his insights on the way forward.

The Weather Machine is very heavily noted, referenced and indexed, displaying the amount of effort and research Blum made to accurately produce such a compact version of literally the history of meteorology.

In less than 200 pages, the book is a quick easy read and probably the most complicated part is Blum’s explanation of how the regional and global models work. There is little oceanography, although sea surface temperature is included as an important model input. The focus is always on better understanding of the atmosphere and predicting the associated weather. A couple of his conclusions near the end are interesting. In the chapter called The Euro, Blum says that of all the models currently available to forecasters, the European (The European Centre for Medium-Range Weather Forecasts – ECMWF) model performs consistently better – but only by a small amount. This was due to excellent co-operation among the many European Meteorological Services which pooled resources and expertise to their advantage. More startlingly, he describes the outputs from all the models processed with super computers of The Weather Company, an offshoot of Weather Underground and The Weather (cable) Channel in the USA. This system now produces global point forecasts which are so good that human (read meteorologist) intervention in any stage or parameter has been proven to decrease the machine forecast accuracy. This foretells new roles for newly hired meteorologists at weather centres and offices, and their roles will start with a machine-produced forecast!

Blum makes other interesting conclusions which we will leave to those reading the entire book.