The Ice at the End of the World

You can’t make this stuff up! In fact, hard data and science might be the best things to really believe. “The Ice at the End of the World” is a terrific read. Historians and scientists, as well as anyone concerned about the future of the planet, would find this book fascinating. There is indeed something for everyone. The research to put this work together may have been made easier by the Web but it is still exhaustive and must have been exhausting. The notes pages add the details about where the facts originate as well. 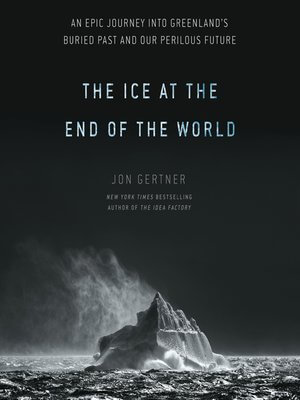 The ice sheet of Greenland may look empty but it hides many secrets. The book chronicles the adventures and hardships of those who unlocked those mysteries. The Inuit who called coastal regions of Greenland home but feared to go into the interior, as it was a place of emptiness and death. The Inuit were instrumental though in teaching the early explorers how to travel across, and survive in, the harsh reality of Greenland.

In the 1800’s everything about Greenland was unknown. What was in the middle? A fabled oasis as envisioned by Jules Verne? Or more ice? No one knew. Early polar explorers like Fridtjof Nansen (1888), Robert Peary, Knud Rasmussen and Peter Freuchen found a high dome of ice after they traversed the deadly crevasses on the edge of the ice sheet.

The polar explorers who evolved into scientists, such as Alfred Wegener, were in awe of the Greenland ice sheet. They asked more questions. What was the temperature of the ice? Was the ice sheet growing or shrinking? These questions required the evolving sciences of glaciology, meteorology and climatology to unravel. Science involved digging pits seven metres deep all around the ice sheet – arduous science indeed. Through the pages of this book Jon Gertner turns these historical giants into real people – some of whom you would like to call friends.

The Cold War turned Greenland into a strategic location for the United States. This interest resulted in funds for ice research. Science on the Greenland sheet boomed.

The technology of drilling ice cores thousands of feet in depth evolved. The Dye-3 ice core reached bedrock through 6,683 feet of ice. The longest ice cores would go through 400,000 years of climate history. Specific events became obvious, like the Caesar volcano that occurred close to 42 B.C. “Plinius the Elder wrote that when Caesar was killed the gods were so ashamed of what Rome did that they hid the sun behind a red veil for an entire year.” The scientists had to invent the technology and science to unlock those secrets hidden in the ancient ice.

Glaciologists turned their attention to the “big gun glaciers” that were calving ice at alarming rates. The Jakobshavn glacier of western Greenland is “perhaps faster and more productive, in fact, than any glacier in the world”. Icebergs from Jakobshavn were credited with sinking the Titanic.

Satellite technology developed so that scientists no longer had to cross the Greenland ice sheet. One pair of satellites called GRACE use variations in gravity to actually measure changes in the mass that they fly over. One really big and basic question remained. Was the ice sheet in equilibrium? If not, was it gaining or losing volume? GRACE helped answer by constantly weighing the ice sheet. Between 2002 and 2009 “Greenland had gone from losing about 137 billion tons of ice per year to losing about 286 billion tons a year”.

The Greenland ice sheet and the western Antarctic sheets are in collapse. The water has to go somewhere. As Jon Gertner writes in Note 34 “Political denials regarding the evidence of climate change seem even more absurd in light of sea level change data. A reliable tidal gauge record showing a steady upward progression goes back to about 1870; satellite readings go back to the mid-1990s. There is close agreement. See https://sealevel.nasa.gov/news/108/new-study-finds-sea-level-rise-accelerating. The rate of sea level rise has risen from 2.5 mm per year in the 1990s to 3.4 mm per year in 1918.”

Simply, the world is warming, the ice is melting, and sea levels are rising. Kurt Wolcken, a seismologist on Wegener’s 1930 expedition calculated that if the Greenland ice sheet was to melt “the oceans all over the world would rise by more than 25 feet…” new research suggests that his estimates might be 8 inches too high…

There is no explanation of the title to be found in this book but the double entendre seems pretty clear. Greenland might be thought to be so remote that it is at the end of the world and the melting of its ice sheet will end the world as we know it.

Any review cannot do this book justice… you will need to read it yourself. A few weeks after reading this book I thought that it needed to be brought to the attention of CMOS. I searched for some of the memorable phrases that I enjoyed in its reading… but mainly came up empty. Specific phrases can be hard to find in 400 pages. You will need to find them for yourself.