Canadian coastal waters are interspersed with baleen whale habitats, some of which are well known and protected, while others have yet to be identified and characterized.

The Whale Habitat and Listening Experiment (WHaLE), funded by Marine Environmental Observation Prediction and Response (MEOPAR), is an initiative dedicated to deepening our knowledge of rare and threatened baleen whales and helping to protect them from ship strikes. This project is a collaboration involving Dalhousie University, Fisheries and Oceans Canada, Ocean Tracking Network, University of Victoria, University of British Columbia, and Woods Hole Oceanographic Institute. A goal of this project is to use autonomous underwater gliders to identify and characterize baleen whale habitat in Canadian coastal waters.

Roseway Basin, NS (Figure 1) is a known and protected whale habitat: the Southeastern margin of the basin in particular has historically had a large number of right whale sightings [Vanderlaan et al., 2008; Davies et al., 2013]. What is it that makes Roseway Basin good habitat and why, in particular, is the Southeast margin favoured? There is still much to be learned about exactly what characteristics and/or oceanographic processes at play make this region attractive to whales, and why similar basins on the Scotian Shelf are less habited [Davies, et al., 2013; Moore, 2017].

Perhaps the whales are following the food; right whales primarily feed on diapausing Calanus finmarchicus (copepods) [Brown, et al., 2009], and fin whales are known to feed on euphausiids [Heise et al., 2007]. It is hypothesized that zooplankton aggregating processes, such as fronts [Franks, 1992] and/or turbulence [Fuchs and Gerbi, 2016], are occurring in the basin, making whale food abundant and highly concentrated.

Fronts, characterized by strong horizontal gradients in water properties, are known to typically be very biologically productive regions. This can be due to their role in segregating different water masses with different water properties and different zooplankton assemblages [Sournia, 1994; Powell and Ohman, 2015], or by creating plankton convergence zones through the interaction of the circulation associated with the front and certain zooplankton swimming behaviours [Franks, 1992].

To examine the influence these physical processes have on the zooplankton distribution in Roseway Basin, we are using underwater gliders, autonomous drone-like instrument platforms which dive and climb in the water column, collecting data in a saw-tooth pattern for several days (Figure 2). Gliders are revolutionizing how we can observe the ocean by collecting substantial high-resolution, long-duration datasets of multiple ocean state metrics via a wide range of sensor payloads. This month we have had two such gliders deployed in the basin, doing repeated transects on the Southeast slope (Figure 3). One, operated by the Ocean Tracking Network (OTN), is equipped with a hydrophone to listen for whale calls, a 300 kHz echosounder to estimate zooplankton abundance, a CTD to measure temperature and salinity, an optode to measure dissolved oxygen concentration, and a series of optical sensors for measuring chlorophyll fluorescence, backscatter, and irradiance. A second glider, operated by the University of British Columbia (UBC, shown in header image), was also equipped with a CTD, oxygen sensor, and optical sensors for various biological proxies. In addition, it carries turbulent microstructure instrumentation to measure turbulence intensity.

Glider measurements in Roseway Basin have been ongoing since 2014, but this is the first time a glider-mounted turbulence profiler has been used in this region. With strong tidal currents on the basin margin, we anticipate that this will be a very dynamic and turbulent region. Flying two gliders in tandem provides a unique opportunity to study the relationship between turbulence, zooplankton distribution, and whale presence. Further, past deployments have focused on mesoscale processes on scales of kilometers to tens of kilometers. This recent deployment has dedicated a week of sampling time to do repeated, shorter (13 km) transects of the Southeastern slope to characterize smaller scale processes like turbulence and submesoscale dynamics, and to capture the temporal variability of fronts.

On this mission, these two gliders have collected a total of 15 slope transects. We have observed density fronts indicated by the slope of the 1025.5 kg/m3 isopycnal (Figure 5), and the presence of dense water (>1026 kg/m3) that originates on the Scotian Slope and typically carries diapausing copepods [Head, et al., 1999; Davies et al., 2013]. We have observed that how the fronts are positioned on the basin slope varies due to the strong tidal currents in the area.

The UBC glider was recently successfully recovered, while the OTN glider is continuing to sample the full extent of the basin for another three months. When it’s done, the two gliders together will deliver a unique data set that allows us to study both meso- and submeso-scale processes in Roseway Basin, and further work towards bridging the gap between physical and biological oceanography.

Acknowledgements: We would like to thank Adam Comeau, Jude Van der Meer, Sue L’Orsa, and Richard Davis from the Ocean Tracking Network for all the hard work they put into the glider deployments. We also appreciate the work of Chris Payne and Benjamin Scheifele on the UBC glider team. We also thank Kim Davies, Hansen Johnson, and Chris Taggart for their expertise and leadership on the East coast WHaLE project. We thank Gennavieve Ruckdeschel for providing the echosounder data used in Figure 4. This work is funded by MEOPAR and 20 partnering organizations, which are listed here: http://meopar.ca/research/project/whale-whales-habitat-and-listening-experiment.

About the Author: Tara Howatt 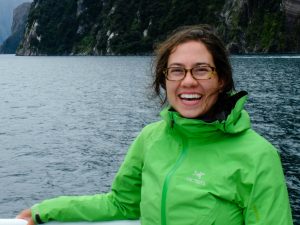 Tara is currently working on her PhD in physical oceanography at the University of British Columbia. She is using underwater gliders to investigate the physical processes involved in creating whale habitat.