Seasonal Outlook for summer 2019 (June, July, August) in Canada includes warmer temperatures in British Columbia and the Canadian Archipelago, and cooler ones across southern Quebec and eastern Ontario. Above normal precipitation levels are expected for the Atlantic provinces. 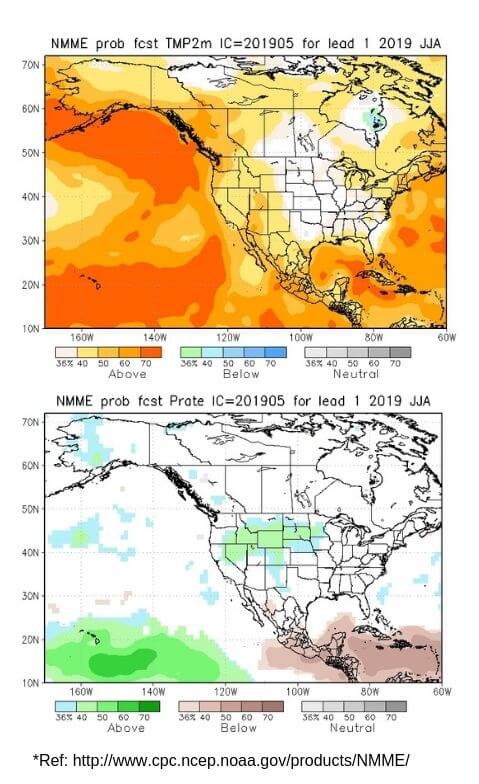 Temperature: according to the NMME (lead 1 month), probability of above normal temperatures are expected across Canada with an exception of the central SK, MT and Eastern ON where the equal probability chances are expected. There is a difference between the NMME and CanSIPS summer forecast for Southern QC, eastern and southernmost ON. Over these region the CanSIPS system is forecasting below normal temperatures for JJA19.

Precipitation: The longer lead (1 month) NMME forecast is showing mostly equal precipitation chances over entire Canada for this summer. There are some scattered exceptions over the central and Southern BC with a very low probability expectancy of >36% for an above normal precipitation.

SST anomalies in the equatorial pacific are currently indicating a mild El Niño. According to the CanSIPS system these warm SST anomalies will remain in JJA19. This forecast is in accord with the International Research Institute forecasting a 70% chance that the El Niño conditions will remain during JJA and more than 50% chance in autumn.

Current, weak, PDO index is likely to remain positive in JJA19. Weakly positive NAO is forecasted for JJA19, mainly in June, after which skill is low. Although positive NAO is historically connected with above normal temperatures over E. Canada in JJA, its influence is weaker than in winter. PNA index will likely stay positive (until early-June, according to the CPC).

Comment: There is little El Niño impact over Canada during summer. 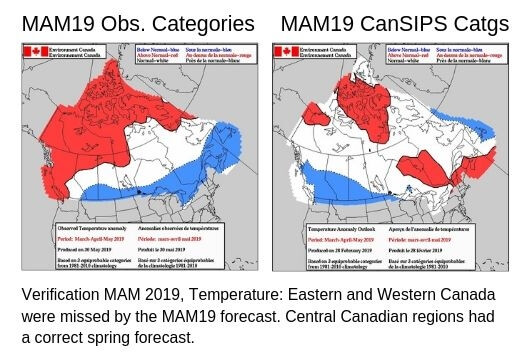