Seasonal Outlook for the spring 2019 (MAM) based on the official CanSIPS forecast issued on the 28th Feb. 2019

Seasonal Outlook for spring 2019 (March, April, May) in Canada includes warmer temperatures in Eastern Canada and Northern Canada, and cooler ones across the central prairies and in to BC. There are currently weak El Niño conditions in the central equatorial Pacific that are forecast to persist throughout the spring 2019.

Equal chances for below/near/above normal precipitation across most of Canada. There is a probability of >40% for above normal precip. over the Maritimes, central QC and southern AB and SK. Below normal probabilities of at least 40% are expected over central western BC and over some scattered regions of central AB.

Temperature: There is a significant difference between CanSIPS and the longer lead forecast from NMME (upper figure) in all Canadian regions. NMME is forecasting equal chances for temperature probability in the northern, central and eastern Canada. According to the NMME there is slightly elevated probability for above normal temperatures over the west coast. Over the eastern Great Lakes region both systems agree on forecasted probabilities of >40% for an above normal Spring.

Precipitation: Like CanSIPS, the longer lead forecast from NMME (lower figure) predicts equal chances for below/near/above normal across most Canadian regions. However differences are seen in the locations where these probabilities are elevated to >40% (e.g. central SK, Maritimes and BC).

There are currently weak El Niño conditions in the central equatorial Pacific that are forecast to persist throughout the spring 2019. Historically, El Niño has a mild warming impact over Canada in spring. This year, in combination with a negative PDO index, it is not likely to have much warming effect over Canada while a shift of the subtropical jet stream to the north will likely bring below normal temperatures to the western and Prairie Canada.

According to the ENSO forecast issued by International Research Institute (IRI), there is a >50% probability that the El Niño conditions will persist throughout this spring. Positive but weak NAO index (according to the NOAA/ CPC prediction) is forecasted at least until mid-March after which the forecasting skill is low. Positive NAO is historically linked with above average temperatures across northeastern Canada. PNA index will likely turn positive but weak by mid March according to the CPC, providing a weak warm influence across Canada. 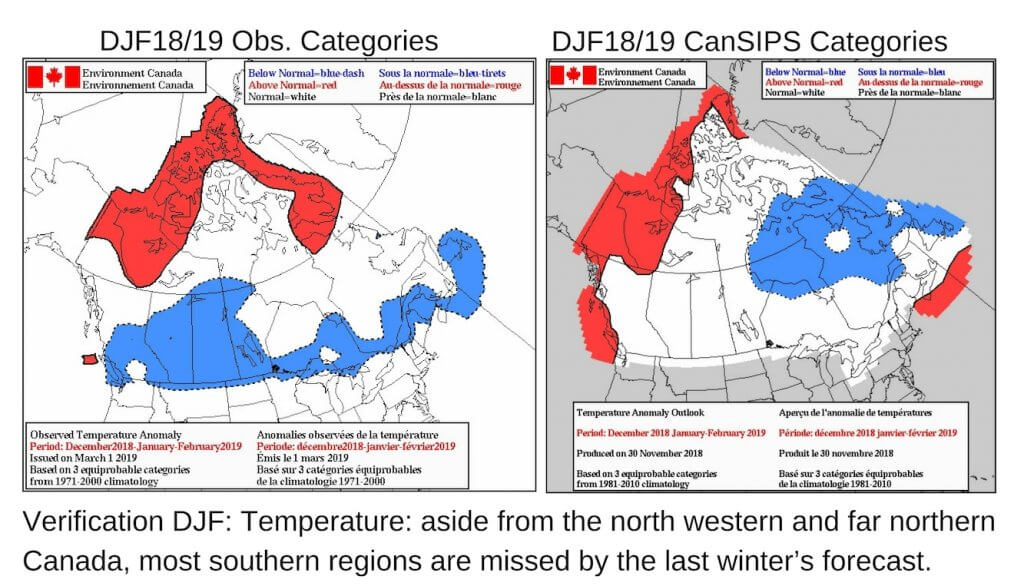