Seasonal Outlook (December, January, February) for 2018/19 temperature and precipitation in Canada includes a cooler winter in the Hudson Bay region, a warmer one all along the west coast and up in to Canada’s North, and near normal precipitation levels for much of the country.

Equal probability chances are expected across southern Canada. Over the southern Canada the winter forecast was inconclusive with an exception of southern BC where we expect ~40% probability for an above normal winter. Same result, with higher probabilities, is expected over NW Canada. Below normal winter is most probable in northern ON, northern and central QC, NL and over the Hudson Bay region. 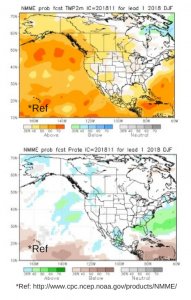 It is highly likely that a weak El Niño will occur in the equatorial Pacific this winter. ECCC predicts this event to persist into the following spring. According to the longer lead seasonal forecast issued by International Research Institute (IRI), there is a probability of ~90% that a weak El Niño will prevail this winter and of ~80% to continue in spring. PDO index is expected to remain near neutral this winter, with a very limited influence to the coastal areas. PNA index will remain positive for the first part of December after which the skill is low. Historically, positive PNA is related to below normal temperatures over NE Canada. According to the ECCC seasonal forecast, weak El Nino will probably have no major impact over Canada this winter except to increase the chance of warm temperatures in the coastal west. Earlier than normal ice formation in Hudson Bay seen in current observations could potentially exert an abnormal cooling in the vicinity during early winter.

Temperature: There is a difference between NMME (longer lead forecast) and CanSIPS. According to the NMME (North American Multi Model Ensemble) (lead 1 month), probability of above normal temperatures (>40%) is expected in western and central parts of Canada and over NS. Eastern ON, QC and the region over the Great Lakes have equal chances for temperature outcome this winter. According to NMME, only northern QC, a region in the vicinity of the northeastern Hudson Bay is most likely to have below normal winter.

Precipitation: There is agreement between CanSIPS and a longer lead forecast from NMME (lower figure), over the southern AB for a 40% probability chance for an above normal precip. Difference between the two systems is seen over the Maritime regions where NMME is predicting the opposite precip. probabilities with respect to CanSIPS. Similarly to CanSIPS, NMME is predicting equal probability chances over most of Canada this winter. 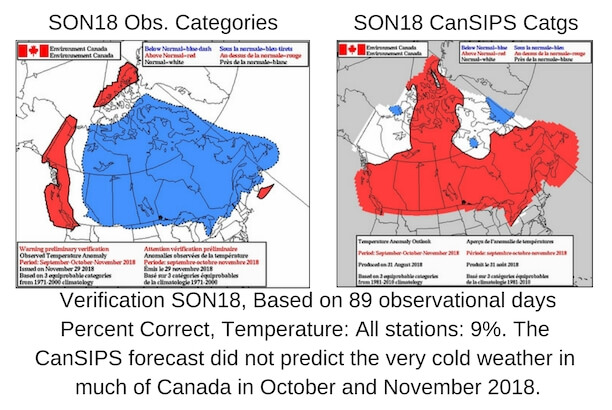