The combination of an Arctic meridional atmospheric circulation (north-south) and high ocean surface heating this summer (JJA: June, July, August 2020) was the main driver of this past season’s temperature, precipitation and sea ice anomalies. Above normal temperatures forecast for all Arctic regions, this winter (November 2020 to January 2021) will continue to have implications for sea-ice over that time period.

Precipitation: High spatial variability between wetter and drier than average conditions was observed across the Arctic during JJA 2020. Wetter than normal conditions are expected across the majority of the Arctic region this winter.

This consensus statement includes: a seasonal summary and forecast verification for temperature and precipitation for previous 2020 Arctic summer season (June, July, and August 2020); an outlook for the upcoming 2020-2021 Arctic winter season (November 2020, December 2020, and January 2021). Figure 1 shows the regions that capture the different geographic features and environmental factors influencing temperature/precipitation.

The temperature and precipitation forecasts are based on eleven WMO Global Producing Centers of Long-Range Forecasts (GPCs-LRF) models and consolidated by the WMO Lead Centre for Long Range Forecast Multi-Model Ensemble (LC-LRFMME). In terms of models’ skill (i.e. the ability of the climate model to simulate the observed seasonal climate), a multi-model ensemble (MME) approach essentially overlays all of the individual model performances. This provides a forecast with higher confidence in the regions where different model outputs/results are consistent, versus a low confidence forecast in the regions where the models don’t agree. The MME approach is a methodology well-recognized to be providing the most reliable objective forecasts.

The June, July, and August (JJA) 2020 average surface air temperatures in the Arctic north of 65°N was above normal over most of the region, including Western and Eastern Siberia, the Chukchi and Bering region, and the central part of the Canadian Arctic (red areas in Figure 2). A persistent high atmospheric pressure over the Central Arctic and Eastern Siberia regions through the summer, combined with low atmospheric pressure over the Alaska and Western Canada region (ERA5, not shown here), led to several heat waves in Eastern Siberia in June and July 2020 and record high temperatures in Eastern Siberia (+38 °C at Verkhoyansk on 20 June). In turn, this atmospheric pattern resulted in slightly below normal surface air temperatures over Western Canada and a portion of the Norwegian Sea (light blue areas in Figure 2).

The JJA 2020 temperature forecast was verified by subjective comparison between the forecast (Figure 3, left) and re-analysis (Figure 3, right), region by region. A re-analysis is produced using dynamical and statistical techniques to fill gaps when meteorological observation are not available. 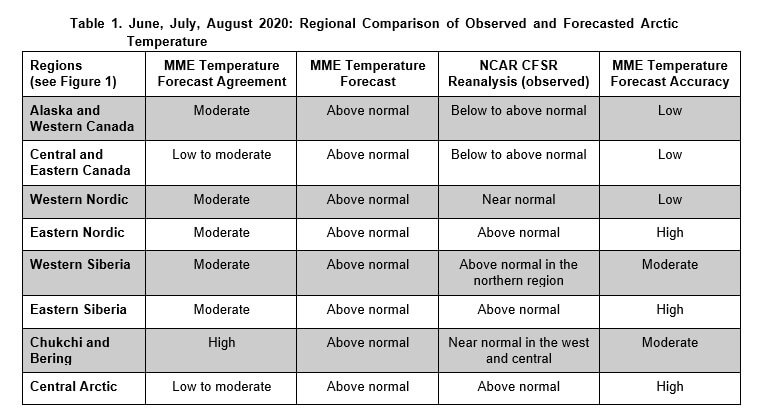 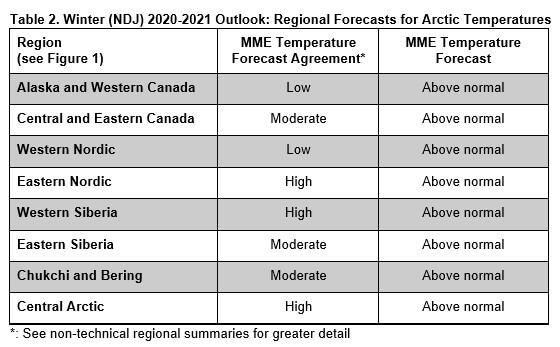 Wetter than average conditions were observed during June, July, and August 2020 (JJA) 2020 over the Western Nordic, and Alaska and Western Canada regions (red areas in Figure 5, left). On the other hand, the majority of the Eastern and Western Siberia regions, along with the Chukchi and Hudson Bay area, experienced drier than average conditions (blue areas in Figure 5, left). The impacts of wetter/drier regions were reflected in the JJA 2020 Arctic rivers discharge: lesser drainage than normal is seen in Ob’, Enisey and Lena rivers, and further eastward (blue areas in Figure 5, right), while the Mackenzie and Yukon rivers experienced greater discharge than normal over that same time period (red areas in Figure 5, right). The snow extent in May-September 2020 was lower than normal, with extreme negative anomalies (no snow) observed in most of Siberia and Alaska (Rutgers Glob SnowLab-https://climate.rutgers.edu/snowcover/). Positive anomalies (more snow) were observed in May in parts of Scandinavia, Eastern Canada, and in September in Northern Canada (not shown here).

The JJA 2020 precipitation forecast was verified by subjective comparison between the forecast (Figure 6, left) and re-analysis (Figure 6, right), region by region. As for temperature, precipitation re-analysis is produced using statistical techniques to fill gaps when meteorological observations are not available. 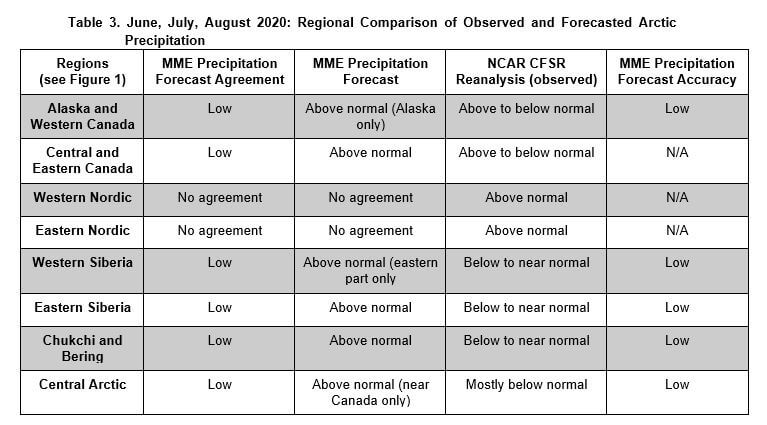 Overall, the accuracy of the JJA 2020 precipitation forecast was low. Indeed, the observed below to near-normal precipitation over the majority of the Arctic was not accurately forecast for the JJA 2020 season (Figure 6, Table 3). In addition, there was no agreement amongst the models over the Western Nordic, Eastern Nordic, and the majority of the Western Siberia regions (predominance of white areas over those regions). As a general conclusion, the multi-model ensemble forecast was not accurate for JJA 2020.

Precipitation during winter 2020-2021 (NDJ: November 2020, December 2020, and January 2021) is forecast to be above normal over the majority of the Arctic region. Forecast confidence is primarily low (light green areas in Figure 7, Table 4), with the exception of the northern parts of the Western and Eastern Siberia regions, and parts of the Central Arctic region, where forecast confidence is moderate (dark green areas in Figure 7, Table 4). The multi-model ensemble did not agree over the majority of the Western Nordic region (white areas in Figure 7). 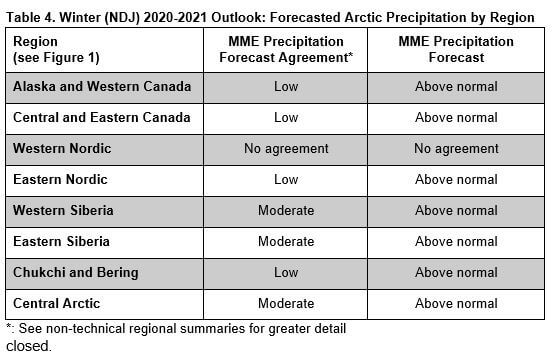 This Arctic seasonal climate outlook was prepared for ACF-6. Contents and graphics were prepared in partnership with the Russian, United States, Canadian, Norwegian, Danish, Finnish, Swedish, and Icelandic meteorological agencies and contributions of the former JCOMM Expert Team on Sea-ice, former CCl/CBS Inter-Programme Expert Team on Regional Climate Activities, the GCW, the IICWG, and with input from AMAP.

The ArcRCC-Network, a collaborative arrangement with formal participation by all the eight Arctic Council member countries, is in demonstration phase to seek designation as a WMO RCC-Network, and its products and services are in development and are experimental. For more information, please visit https://arctic-rcc.org/acf-fall-2020