At 17-years old, Haowen Qin is an incredibly passionate and knowledgeable budding meteorologist, and is CMOS’ youngest member to date. I recently had the opportunity to interview Haowen, at the urgings of our very own Prof. Douw Steyn who has been mentoring this young man and has seen what his curiosity, intelligence and drive are capable of. Read the quite remarkable story of Haowen’s relationship with meteorology, and why we are quite privileged to be in a position to support him and others like him – the next generation of atmospheric and ocean scientists, at a time when the world most certainly needs them.

Q: Tell me a bit about yourself, and how you became interested in Meteorology?

I am 17 years old and will be starting grade 12 in September at St. George’s School, in Vancouver. I was always interested in math, and always curious about how things worked in general. I like to think! My parents say I spend a lot of time wondering in the realm of things that I don’t really understand!

In grade 4 I read about a Chinese meteorologist Coching Chu in a textbook. He was the founder of East Asian meteorology. At that time China didn’t have any meteorological devices, anywhere, so he just started recording weather data, every single day, for 60 years. The text said that even on the last day of his life, his trembling hand held a pencil as he recorded his measurements. His dedication really inspired me, and ever since then I have been recording weather data, every day, for 8 years now. First in Shanghai where I was living, and now I record data for both Vancouver and Shanghai. I have notebooks full of my measurements and observations.

Another factor that compelled me to pursue a path in meteorology was that in 2012, the year I started weather recording, Arctic sea ice reached a historic minimal and climate change became a really big topic. I realized that observing weather and learning about it would be really meaningful.

Q: How do you take your measurements and what do you record?

In grade 8, I moved to Vancouver from Shanghai, and I set up a weather station in my school with my science teacher. Pretty soon after I moved here, my interest in weather became known, and within a month people were calling me the “Weatherman”! My science teacher heard about this and approached me to say that we had some spare money in the school and asked if would I help set up a weather station. It is still going in the school now.

I also use the official YVR site and I have some devices at home.

I usually start with just looking out my window and noticing the surroundings. Then I make notes on things like the first and last frost dates, the day of the first leaf on the Maple tree outside, as well as when the cherry blossoms first appear and when the trees lose all the leaves. At my school, I notice and record when dozens of Canadian geese flock to the rugby fields in front of the campus. In Shanghai, I recorded when the pond in my neighborhood froze. Here I watch the snow line creeping down on the mountains north of Vancouver as winter sets in. I appreciate those things. Being aware of nature makes me feel connected to the Earth, as a living part of it.

I also record the standard stuff like daily high and low temperature, precipitation, wind speed and direction, and barometric pressure.

Q: What do you get out of doing this?

People sometimes ask me “How is it possible that you can be fascinated about such a mundane thing like the weather?” I notice that other people see the weather as the same thing that happens every day, but I see it as a different thing every day, and I appreciate it. I always come back to the numbers. I like to look at my data and see what patterns are appearing. What is the relationship between whether the snow comes early or late, and how early or late the flowers first appear in the spring? And sometimes really interesting patterns appear! For example, I looked at the first frost and last frost in Vancouver for the last three years, and even though the dates are different (by as much as a month) each year, there were respectively 176, 175, and 176 days between the first and the last, almost the same length!

I have also noticed how the weather in Shanghai and the weather in Vancouver are connected. One on the west side of the Pacific, the other on the east. I have learned it is called “teleconnection.” Sometimes I look at a satellite picture and follow low-pressure systems from Shanghai across the ocean. In summer, the systems generally get deflected towards Alaska because of the high pressure ridge that sits over Vancouver. In fall, I often experience storms in Vancouver which visited Shanghai a week ago!
Once, in grade 9, I was out on a camping trip on Vancouver Island, and I kayaked through a Western Pacific Typhoon that I had been watching over Shanghai! It had crossed the Pacific, transforming into an extra-tropical cyclone, before it hit the BC coastline.

Q: I hear you recently won an award for your science project on meteorology, can you tell me about it?

My project was awarded a Bronze Medal and SFU Faculty of Science Award at the 2019 Greater Vancouver Regional Science Fair. The project “Integrated Tropical Cyclone Energy” showed how cyclones are categorized today, only by wind speed, and also how my approach of using “integrated energy” might be a better way to understand the actual potential impact of a hurricane on humans. I included measures of damages such as financial loss and fatalities. In that project I analyzed 97 tropical cyclones that made landfall in Canada, China, Japan, the Philippines, and the United States, with over 1000 data points!

It is about developing and applying a new tropical cyclone categorization system, after seeing the Saffir-Simpson Wind Scale sometimes misrepresents a cyclone’s destructiveness: a cyclone might not have a particularly fast wind speed, but it can cause a lot of damage because it is so large. For example, last year’s Hurricane Michael was a Category 5 at landfall while Florence was a Category 1, but they both caused about the same amount of (nominal) damage. Hurricane Florence picked up so much moisture, but this was not reflected in wind speed, which was how the hurricane was categorized.

The project was actually the successor of my science project in grade 9. Then I hadn’t yet learned any hard core physics, so what I did wasn’t really scientifically sound, but I wanted to try to show a different understanding of hurricanes. Using my experience in tracking typhoons online and discussing with other amateurs, I plotted the cloud temperatures, eye temperatures, wind speed, and radius of a cyclone on a chart. From a traditional science point of view, they aren’t necessarily connected, but it helped me understand the different factors. I entered this into the Greater Vancouver Regional Science Fair and won an honorable mention.

Q: How did you meet Prof. Steyn? 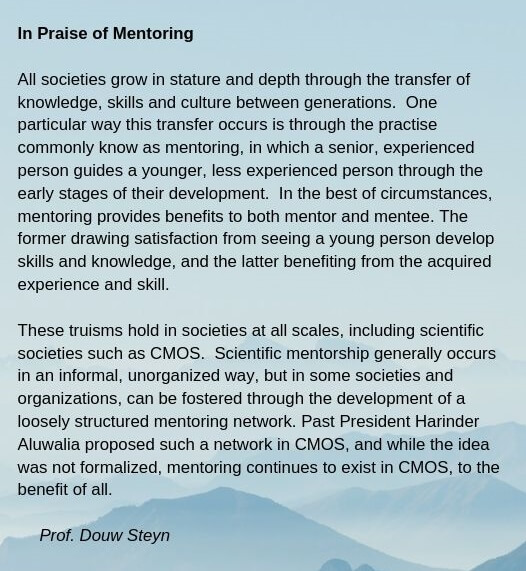 Shortly after that, I encountered Prof. Douw Steyn, and he became a great help to me! When I was in grade 9, a grade 12 student from another school heard that I was known as the “Weatherman,” and he asked me to provide data assistance to his project on climate change (International Baccalaureate final project). His project group then invited me to join them when they were interviewing some atmospheric scientists from the University of British Columbia. Prof. Steyn was one of them. We quickly connected when he realized how much knowledge I had about the language of meteorology. We met up again and he offered to help me with my project, by giving me some guidance on the scientific approach to using the data that I had to understand hurricanes. I remember at the time that Prof. Steyn said that my project was “legitimate and interesting”. These words meant I was on the right track! He also told me that when I learned more in math and physics I would understand how to solve the problem of relating my data, myself. The great thing was, he was right! On my very first day of learning integration in my Grade 11 AP Calculus class, I went home that night and applied what I had learned to my project. It was indeed the right approach!

Q: How did you get to be a member of CMOS?

In the summer of 2017 when I was moving in to grade 10, Prof. Steyn advocated for me to join CMOS, and I learned that I was the youngest member ever. I felt that there was a mission for me in that, and I became even more excited to do things related to weather.

I’ve already gotten so much from CMOS members. Other than Douw Steyn, Rich Pawlowicz, Cindy Yu, and Ken Kwok have been really helpful.

Q: What is next for you?

Environmental issues and climate change are a big problem, and I think awareness and action are a big part of the solution. Addressing both science and policy factors is important. Prof. Steyn showed me an article from the Globe and Mail on Canadian Research in the Arctic, and how it is under threat because the federal funding for research in the Arctic is just not enough. I see how policy plays a big role in whether or not science can happen, and it is so important that we advocate for science, and action, and communicating science in a way that everyone can understand is crucial.

Right now at school assemblies, I often go up and talk about our weather and our changing seasons, to help people stay better informed in what is happening around us. I am also a part of my school’s environmental stewardship program, and as a part of that I was curious about our environmental audit. I read the one that had last been completed, in 2013, in which they said they would do another one in 5 years. I advocated for this to happen, and I managed to convince the school’s administration to set aside the money to do another audit. It is happening right now! I lobbied the principal and it worked!

Now, I get younger students coming up to me and telling me that they are interested in weather too. I feel a real passion to help students get more engaged with meteorology, so if more students are interested in this field, or in related fields, more people will understand climate change and its impacts, more people will go into important research, and we will start finding more solutions.

My dream is to someday work for the WMO, where I see that science and policy really meet. In 2018 I met Ken Kwok, and he invited me to visit Environment Canada’s office in Vancouver. On the tour he showed me the seat where David Grimes used to sit. It is really inspiring for me to know of people like him, who are making such a difference in using science to inform policy. I hope to attend the CMOS congress in Ottawa in 2020 and learn from David Grimes, and so many other experts.

In the meantime I am always happy to talk about meteorology and get any input that I can into my project! If anyone from CMOS has ideas for me I would love to hear them.