In My Opinion: On greed, power and making the weather

– By Phil Chadwick, Meteorologist and Eco-Artist –

I figure if one is going to have an opinion about climate change, it had better be an informed opinion. I thought I was well informed but there is always something to learn too. The Weather Makers by Tim Flannery was published in 2005 just after Hurricane Katrina. Fifteen years later not much has changed – the politicians continue to dither. 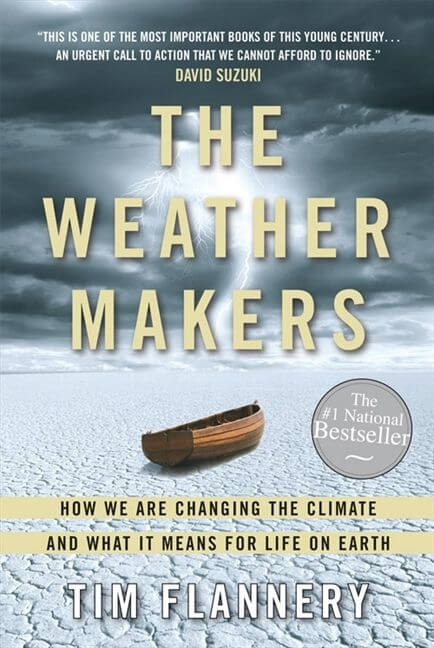 The book delivers as advertised. The 356 pages detail exactly how we are changing the climate and what it means for life on the only planet we know. It is thorough and accurate. The earth and atmosphere system is indeed complicated with many feedback mechanisms that swing both ways. The research and science devoted to how humans are interfering with this delicate balance have been peer reviewed and closely examined for weaknesses. Simply, there are none. Any unknowns are clearly stated. We have reached the “Act of God” tipping point.

A.P. Herbert defined in Uncommon Law in 1935 that an Act of God was “something which no reasonable man could have expected”. The impacts of climate change are no longer Acts of God. Science can prove it and “the judiciary will be faced with apportioning guilt and responsibility for human actions resulting from the new climate”.

The rich and powerful have been polluting the atmosphere and oceans for profit. Simple greed. You might also read Dark Money described as “The Hidden History of the Billionaires Behind the Rise of the Radical Right” (2016). Dark Money is a non-fiction book written by the American investigative journalist Jane Mayer about a network of extremely wealthy conservative Republicans, foremost among them Charles and David Koch who have together funded an array of organizations that work in tandem to influence academic institutions, think tanks, the courts, statehouses, Congress, and the American presidency for their own benefit.

Their game plan is simple and has been played without variation on many occasions when their self-centred profits where threatened: (from The Optimistic Environmentalist by David R. Boyd):

Far worse has been done as well but few have been held responsible which is concerning about the independence of the judiciary.

There are many other books that cover similar material. In 2000 Jack Doyle published Taken for a Ride: Detroit’s Big Three and the Politics of Pollution in which he exposed the fight and miss-information campaign resisting the creation of clean transportation. This was in response to the London air pollution disaster of 1952 and the public outcry about air pollution in general. Ford argued in 1953 that automobile exhausts “are dissipated in the atmosphere quickly and do not present an air pollution problem”. President Reagan declared in 1981 that “Trees cause more pollution than automobiles”. Corporations clearly have enough money to buy democracy.

Flannery also investigates “the corrupt relationship between government and industry. And it is into this cesspit that we must now leap.”, as he described in chapter twenty-six entitled “People in Greenhouses Shouldn’t Tell Lies”. The campaign of deceit and spreading misconceptions has been very successful though, as employed by the transportation, tobacco, DDT, CFC’s, asbestos and GMO industries to name just a few. The result has been decades of indecision when the viable solutions are readily available. The net results being that those funding the bogus science and confusion continue to profit.

The issue returns to one of greed and power. As Flannery says the Act of God Defence will no longer work. The science and knowledge explaining climate change are established just as it was for the other harmful industries. Those profiting from promoting fossil fuels can be held accountable by law.

Real change though apparently needs to come from the people. Elected followers closely study the polls to ensure they remain in power. Power is paramount and it can control you like greed. When the polls tip toward green innovations, as they surely must, the politicians will eventually follow. The transition to a green economy will not be politically supported until the polls reflect that the public want green.

The impacts of a changing climate could sway public opinion. Hurricanes, floods, droughts, wildfires and heat waves can be very persuasive. I always thought that becoming informed and prepared would be better than waiting for the catastrophes. Being proactive is much more affordable than simply being uninformed and reactive. Meanwhile species are going extinct as the result of our inability to act.

The Weather Makers is an important read if you want to have an informed opinion regarding climate change. Time for real, pre-emptive action is long past but better late than never. This needs to get done even if only to tell your children and grandchildren that you tried to make a difference. The school presentations, letters to the Editor, MP, MPP and PM have yet to bear any fruit. But it is important to remain optimistic for the sake of the generations yet to come.

Canada has a very long way to catch-up on the Scandinavian countries that are leading the way forward into a greener future. Meanwhile our politicians are still debating the pros and cons of dumping billions of litres of raw sewage into the nation’s waterways. Shame.

You might consider reading The Optimistic Environmentalist by David R. Boyd published in 2016. Portions of the world are actually proving that the circular, green economy is the way forward. Indeed people and the planet can profit while preserving the environment and the habitats of the creatures that also share the globe.

How have things changed in the fifteen years since the release of The Weather Makers?

Pictures are worth a thousand words – maybe a lot more. Here they are.

Greenhouse gas emissions climbed by 70 percent in the 34 years between 1970 and 2004. Atmospheric carbon dioxide concentrations rose by 1.8 percent between 2017 and 2018. The burning of fossil fuels for electricity, heat, and transportation has only increased since 2005 although the rate of increase is about steady near 2 percent a year.

Global temperatures have responded to the continuing increases in greenhouse gas concentrations. The temperature deviations from normal during the period from 2014 to 2018 are displayed in the depiction from NASA on the right. The Arctic is warming much faster than the rest of the globe.

The impacts on the jet stream because of the weakening of the temperature gradient between the equator and the poles are now being felt in the weather patterns.

The resultant rise in global average temperature has been well predicted by complex computer simulations of the earth-atmosphere system that are increasingly inclusive of the physical processes at work. The science of climate change has improved dramatically.

The thawing of the permafrost is a runaway feedback mechanism that will release methane into the atmosphere. CH4 has 30 times more impact that CO2 but is not as persistent in the atmosphere.

The global ice packs are melting at an accelerated rate as the globe warms. The melting of the Greenland ice sheet has finally caught the attention of the world. Greenland is losing ice seven times faster than it was in the 1990s. The Antarctic as a whole contains about 90 percent of the planet’s ice and is showing signs of an increased melt as well Antarctic ice shelves that float on the Southern Ocean are eroding. The vast glaciers behind these shelves could accelerate their slide into the sea as happened in 2002 when the Larsen B ice shelf collapsed off the Antarctic Peninsula.

The mean sea level must rise on a warmer globe due to thermal expansion and the melting of the planet’s ice. The rate of mean sea level rise is increasing.

The melting on the Greenland ice will contribute 10 to 20 mm to the global mean sea level. About 10 per cent of the world’s population live in coastal areas that are less than 10 meters above sea level. Approximately 40 per cent of the world’s population (2.4 billion people) live within 100 km of the coast. Rising sea levels, tides and storm surges from stronger tropical storms will have considerable impact.

The effects of climate change as described in “The Weather Makers” are being observed. The surprise is the speed at which these changes and their impacts are occurring – way faster than it was ever believed to be possible. Incremental influences of climate change can be heard in the daily news. Record breaking weather gradually accumulates to become the new climate.

Although the science of climate change continues to improve, there are powerful and influential organizations that refute this knowledge. They are well-funded by corporations that profit from the burning of fossil fuels. These actions have escalated since 2005 and the publication of The Weather Makers.

Climate lobbying has been very effective as demonstrated by the inactions of most of the countries of the world. Canada still relies heavily on the extraction of fossil fuels and is the third highest per capita emitter of CO2 – three times the world average. 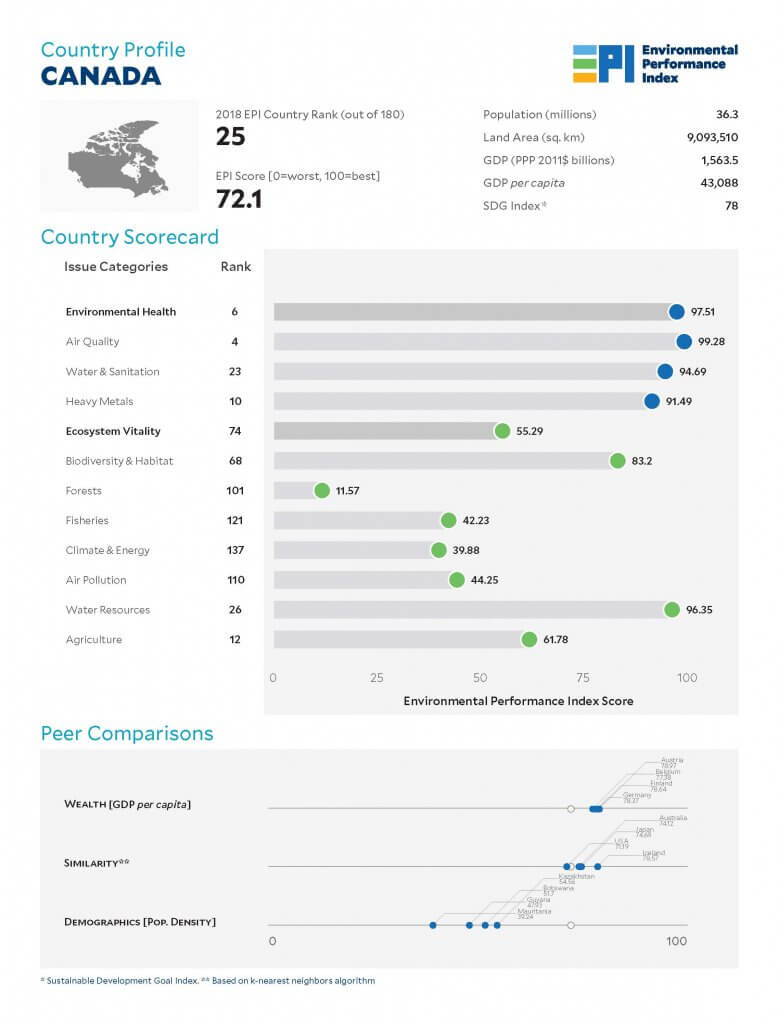 The Environmental Performance Index (EPI) offers an independent assessment at a national scale of how close countries are to established environmental policy goals. The EPI is a joint project of the Yale Center for Environmental Law & Policy and The Center for International Earth Science Information Network (CIESIN) at Columbia University’s Earth Institute. The EPI is produced in collaboration with the World Economic Forum (WEF). The EPI ranks 180 countries on 24 performance indicators across ten issue categories covering environmental health and ecosystem vitality. These metrics provide a scorecard that highlights leaders and laggards in environmental performance, gives insight on best practices, and provides guidance for countries that aspire to be leaders in sustainability. Canada ranks 25th in this list.(A good reference, worth a read.)

Not enough has changed since 2005. Canada needs to do much more. Political decisions in recent years have turned Canada in more of a laggard.