Arctic temperatures continue to warm at more than twice the global mean. Annual surface air temperatures over the last 5 years (2016–2020) in the Arctic (60°–85°N) have been the highest in the time series of observations for 1936-20201. Though the extent of winter sea-ice approached the median of the last 40 years, both the extent and the volume of Arctic sea-ice present in September 2020 were the second lowest since 1979 (with 2012 holding minimum records)2. To support Arctic decision makers in this changing climate, the recently established Arctic Climate Forum (ACF) convened by the Arctic Regional Climate Centre Network (ArcRCC-Network) under the auspices of the World Meteorological Organization (WMO) provides consensus climate outlook statements in May prior to summer thawing and sea-ice break-up, and in October before the winter freezing and the return of sea-ice. The role of the ArcRCC-Network is to foster collaborative regional climate services amongst Arctic meteorological and ice services to synthesize observations, historical trends, forecast models and fill gaps with regional expertise to produce consensus climate statements. These statements include a review of the major climate features of the previous season, and outlooks for the upcoming season for temperature, precipitation and sea-ice. The elements of the consensus statements are presented and discussed at the Arctic Climate Forum (ACF) sessions with both providers and users of climate information in the Arctic twice a year in May and October, the later typically held online. This consensus statement is an outcome of the 6th session of the ACF held online on 28-29 October 2020 and coordinated by the North American Node of ArcRCC-Network hosted by the United States of America.

HIGHLIGHTS
The combination of an Arctic meridional atmospheric circulation (north-south) and high ocean surface heating this summer (JJA: June, July, August 2020) was the main driver of this past season’s temperature, precipitation and sea ice anomalies. Above normal temperatures forecast for all Arctic regions this winter (November 2020 to January 2021) will continue to have implications for sea-ice over that time period.

Sea-ice: The Northern Hemisphere September 2020 minimum sea-ice extent was the 2nd lowest since 1979, with the Eurasian seas and the Northern Sea Route completely ice free while sea-ice conditions in the Beaufort Sea and the Canadian Archipelago were close to normal. Later than normal fall freeze-up is expected for Baffin Bay, East Siberia, and the Kara, Labrador, and Laptev Seas; near normal to early freeze-up is expected for all other regions. Below to near normal 2021 maximum sea ice extent are forecast for majority of the Arctic.

This consensus statement includes: a seasonal summary and forecast verification for sea-ice for previous 2020 Arctic summer season (June, July, and August 2020); an outlook for the upcoming 2020-2021 Arctic winter season (November 2020, December 2020, and January 2021). Figure 1 shows the established shipping routes and regions used for the sea-ice products.

The majority of the sea-ice extent and experimental freeze-up forecasts are based on the Canadian Seasonal to Inter-annual Prediction System (CanSIPSv2), a multi model ensemble (MME) of two climate models. The Baltic Sea forecasts are developed using outputs from the ECMWF Long-Range Forecasts, UK MetOffice, and NOAA CFSv2. A larger multi-model ensemble that will include forecasts from the following WMO GPC-LRFs is under development: ECCC/MSC (CanSIPSv2), NOAA (CFSv2), Meteo-France (System 5), UK MetOffice (GloSea5) and ECMWF (SEAS5). When sea-ice extent is at its maximum in March of each year, forecasts are available for the following peripheral seas where there is variability in the sea-ice edge: Barents Sea, Bering Sea, Greenland Sea, Northern Baltic Sea, Gulf of St. Lawrence, Labrador Sea, and Sea of Ohkotsk. In addition to these regions, forecasts for sea-ice freeze-up are also available for Hudson Bay, East Siberian Sea, Kara Sea, Laptev Sea, Chukchi Sea and the Beaufort Sea. Winter outlooks for key shipping areas are provided by the Arctic and Antarctic Research Institute, American, Canadian, Norwegian and Finnish ice services, and are based on statistical model guidance and forecast expertise.

Sea surface temperature (SST) anomalies and the heat content (HC) of the upper layer of the polar ocean influences the melting and growth of sea-ice. High positive SST anomalies and prevailing positive polar ocean upper layer (20 m) HC during June-August 2020 (MERCATOR Ocean reanalysis, not shown here) simulated the melting of sea-ice in parts of the Kara and Laptev Sea. On the other hand, near normal to below normal SST and HC anomalies over that same time period slowed the melting of sea-ice in the Beaufort and Chukchi Seas (Figure 2).

The 3.9 mln km2 minimum sea-ice extent reached on September 12, 2020 is the second lowest minimum sea-ice extent since 1979, with the minimum summer sea-ice extent observed in 2012 (3.35 mln km2). Estimates of the sea-ice volume based on numerical reanalysis (HYCOM-CICE, PIOMAS) show that the 2020 sea-ice volume is the second lowest, with 2012 and 2016 tied for lowest. The 2020 sea-ice is not considerably lower than that of 2019, suggesting higher summer sea-ice thickness in 2020 compared to 2019. However, extreme reduction of the Arctic sea-ice cover this summer significantly differs in shape with that of 2019. While the Eurasian shelf seas and the Northern Sea Route were completely ice free, sea-ice conditions in the Beaufort Sea and the Canadian Archipelago were close to normal, with the Northwest Passage closed.

Higher than normal sea surface temperatures and surface layer heat content were observed in the Eurasian Arctic, Bering Seas, and parts of the Baffin Sea and Hudson Bay during summer 2020. On the other hand, the Beaufort Sea and a portion of the Greenland and Barents Seas experienced their lowers surface heating in 20 years. The absence of sea-ice, combined with high surface heating, resulted in stormier than normal conditions over most of the Arctic shelf seas and adjacent parts of the Arctic Basin (not shown here).

The forecast for September 2020 sea-ice extent (Figure 4) was based on output from CanSIPSv2 and an MME of two climate models. Forecast accuracy was high for all regions with the only exceptions being two instances of low accuracy noted in the Barents and Greenland Seas (Table 1). The summer seasonal forecast of above normal sea-ice extent in the two aforementioned areas were the only instances of forecasted higher than normal sea-ice coverage, whereas all regions in the Arctic summer forecast witnessed below normal conditions. Above normal air temperatures across most of the Arctic supported significant sea-ice losses in all basins, as below normal sea-ice extents at the September 2020 minimum were observed in every forecast region. Additionally, notable warm sea surface temperature anomalies were observed in the Eurasian Basin and northern Baffin Bay that contributed to the severely diminished sea-ice extents in these sectors. Observed lower than normal old sea-ice concentrations in the southern Beaufort Sea and the Canadian Arctic Archipelago also led to lower extents in these regions as old ice tends to be thicker and thus less prone to complete melt than first-year ice types. 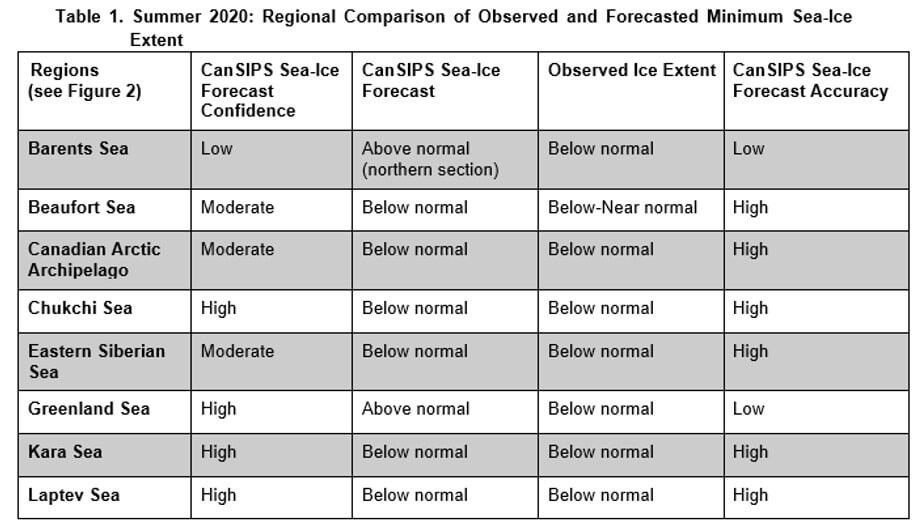 Outlook for Fall Freeze-up 2020:
Sea-ice freeze-up is defined as the date where ice concentration exceeds 50% in a region. The outlook for fall freeze-up shown in Figure 5 displays the sea-ice freeze-up anomaly from CanSIPSv2 based on the nine-year climatological period from 2011-2019. The qualitative 3-category (high, moderate, low) confidence in the forecast is based on the historical model skill. Only regions where the model has historical skill are included in the outlook (Figure 6). A summary of the forecast for the 2020 fall freeze-up for the different Arctic regions is shown in Table 2. 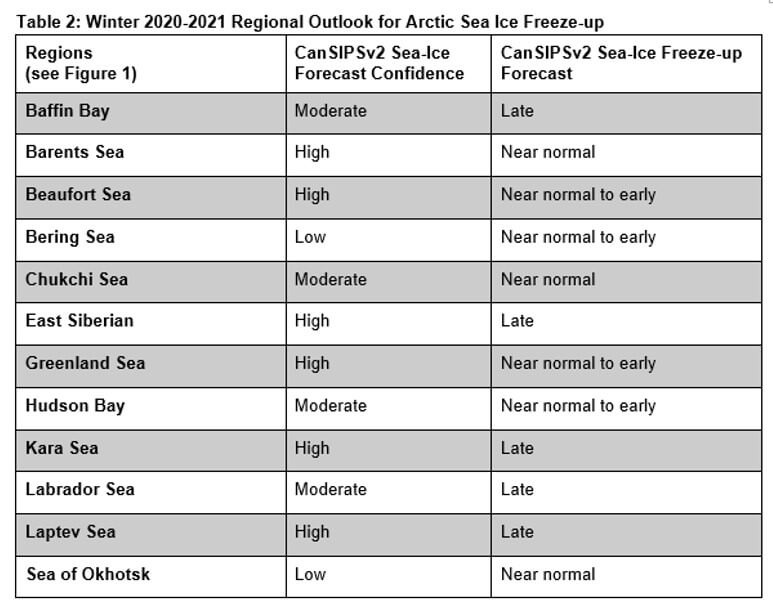 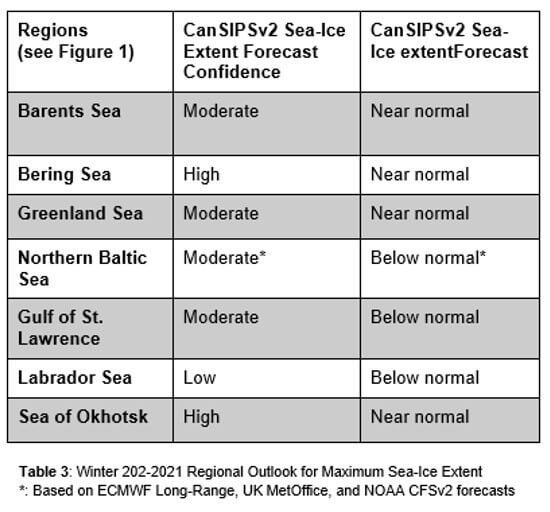 Maximum sea-ice extent is normally achieved each year during the month of March in the northern hemisphere. Table 3 categorizes the sea-ice extent forecast confidence and relative extent (i.e. near normal, below normal, above normal) by Arctic region with respect to an average sea ice extent based on 2009-2017 conditions. Figure 7 displays the probabilities of sea-ice presence for concentrations greater than 15% and the forecasted mean ice extent from CanSIPSv2 (black), with the observed median sea-ice extent for the 2012-2020 period in red. The sea-ice extent is expected to be below normal for the Northern Baltic Sea, the Gulf of St. Lawrence, and the Labrador Sea, and near normal for the Barents Sea, the Bering Sea, the Greenland Sea, and the Sea of Okhotsk.

The Baltic Sea: The sea-ice season in the Baltic Sea regime is expected to become mild according to the seasonal sea ice forecast. Navigation will be affected by ice mainly in the Bay of Bothnia and in the eastern Gulf of Finland. A mild winter with its fluctuating weather typically causes ice deformation and brash ice barriers to form at the ice edge, both of which are difficult for shipping.

Svalbard and Barents Sea: The sea-ice freeze-up time and March 2021 extent around Svalbard and in the northern part of the Barents Sea is expected to be close to normal for the upcoming winter season, based on the forecast model. However, since the model does not show if the sea-ice extent is composed of older ice advected into the area or new ice grown in situ, the impact for users is difficult to ascertain.

Northern Sea Route (NSR): Later than normal freeze-up and below normal sea-ice conditions are expected for the NRS this winter based on current and forecasted sea surface and surface air temperatures. The expected winter air temperature regime will continue to support the development of medium first-year ice in the Kara Sea and thick first-year ice in the Laptev and Eastern Siberian Seas. Forecasted lighter ice conditions should mitigate any significant difficulties encountered in the area. The expected higher than normal snow height may delay the start of the melting processes this spring.

Sea of Okhotsk: Earlier than normal freeze-up and normal March 2021 sea-ice extent in the Sea of Okhotsk are expected based on current ocean and forecasted surface air temperatures, and numerical model guidance.

This Arctic seasonal climate outlook was prepared for ACF-6. Contents and graphics were prepared in partnership with the Russian, United States, Canadian, Norwegian, Danish, Finnish, Swedish, and Icelandic meteorological agencies and contributions of the former JCOMM Expert Team on Sea-ice, former CCl/CBS Inter-Programme Expert Team on Regional Climate Activities, the GCW, the IICWG, and with input from AMAP.

The ArcRCC-Network, a collaborative arrangement with formal participation by all the eight Arctic Council member countries, is in demonstration phase to seek designation as a WMO RCC-Network, and its products and services are in development and are experimental. For more information, please visit https://arctic-rcc.org/acf-fall-2020