Catastrophes and The Insurance Industry

Catastrophes not only disrupt communities and people’s lives, but they also have a major financial toll. In Canada, insured losses due to natural disasters have increased steadily over the past decade, and it is becoming more common for annual insured losses due to catastrophes to exceed $1B. The majority of catastrophic events the past two years have not been a result of the traditional damaging hail in the Prairies, but from larger-scale events in eastern Canada. Water is becoming a bigger player as the industry continues to increase exposure to the peril.

What is an insurance catastrophe?

Whether the frequency of extreme events is increasing or not, insured catastrophic losses have increased over the last decade (Figure 1). A catastrophic event (CAT) is an event that affects multiple policies and causes more than $25 million of insured damage. Catastrophe Indices & Quantification Inc. (CatIQ) is Canada’s insured loss index provider, which means that CatIQ produces insured loss estimates on CATs. A majority of the Canadian property & casualty insurance market submits CAT data to CatIQ, which is then aggregated to produce the industry-wide total by province and line of business (personal, commercial, auto). Data in this article comes from the CatIQ database (2008-present) unless otherwise stated.

CATs can be a result of different perils at varying magnitudes. However, since property must be damaged, the most important factor is usually location. For instance, a thunderstorm which produces softball-sized hail in a rural area would not cause as much damage than if the stones pelted a populated centre.

In the summer of 2018, there were 6 thunderstorm related CATs, and five Notable Events (~$10-25M in insured damage). On the last day of summer, severe thunderstorms rolled across southern Ontario and Quebec, some of which produced devastating tornadoes to the Ottawa and Gatineau region. The tornadoes, downbursts and hail totaled more than $295M of insured losses. Much of the damage was confined to the areas impacted by the tornadoes due to severity of the winds (Figure 2). In contrast, southern Ontario and Quebec experienced a different type of wind-related storm in early May, where prolonged gusty winds downed trees onto property and tore shingles off homes. A peak wind gust of 126 km/h was reported at the Hamilton International Airport and resulted in more than $500M of insured losses; becoming the costliest CAT in Ontario since the Toronto floods in July 2013.

The costliest catastrophe in Canada’s history remains the Fort McMurray Wildfire of May 2016; and holds Canada’s record for the largest mass evacuation, where over 80,000 people were forced to flee their homes. Insured losses from Fort McMurray have been estimated at ~$3.8B, after the fire destroyed over 2,000 structures.

Insured losses not only come from physical damage; mass evacuation on its own can lead to a CAT and was the case for the City of Williams Lake, BC in July 2017. Multiple wildfires neared the city and threatened to cut off highways, so an evacuation order was issued for more than 20,000 residents. After a 12-day evacuation, including power outages, additional living expenses and business interruption, there was enough insured loss incurred to reach the CAT threshold.

The summer is known as “CAT season” due to the high frequency of thunderstorms and wildfires. Not only is the summer active in general, but the summer perils are also the most insured perils; home policies generally cover wind, fire and hail, but where does water fit in?

Water is probably the most misunderstood coverage on a home policy. Water damage related to burst pipes, broken taps, bad connections, and hot water tank failures are included in most policies (A Guide to Residential Water Damage and Flood Insurance). However, additional coverage would likely be needed if the sewer backs up, and is available to most who want the coverage. On the other hand, additional overland flood coverage is not available to everyone and, if it is offered, may not be affordable. Typically, overland flooding occurs in the spring, when temperatures warm, the snowpack melts, ice jams occur, and precipitation transitions to rain (and falls onto a frozen or saturated surface).

This past spring, the Saint John River spilled its banks flooding Fredericton, Saint John and many communities in between, but this did not result in an insurance CAT… why? Locally, this was considered a disaster, however the flood insurance gap was large (a combination of not being offered and low take-up rate). Many homeowners without overland flood insurance would have to pay for the damage themselves. If a homeowner has never experienced a flood, they might not recognize that a risk exists. If they do not recognize the risk, how can it be expected that they will take the necessary measures through seeking insurance or taking mitigative measures? A survey of 2,300 Canadians living in flood zones, conducted by Partners For Action in May 2017, found that only 6% were aware of the risk. Now that the industry is increasing its exposure to water, there is the potential for more CATs to occur outside the traditional “CAT season”; 77% of the market now offers overland flood coverage (https://www.canadianunderwriter.ca/insurance/many-canadians-actually-understand-water-damage-coverage-1004149526/).

Next to flooding, the winter and spring also bring conditions suitable for ice storms. This past April, southern Ontario and Quebec experienced snow, ice pellets, and prolonged freezing rain. The weight of the ice caused trees to fall on homes and vehicles. To add salt to the wound, strong winds and flooding rains quickly followed causing further damage. The insured losses from the event resulted in more than $190M.

In April of 2018, CatIQ declared 100 CATs in just over decade (Press Release), and as of Dec 2018, 108 CATs have cost the insurance industry more than $18B. Thunderstorms may make up 60% of the total number of events over this period (Figure 3), but they only make up half of the overall losses. The most significant insured loss events in Canada’s history are actually not thunderstorm related, and include the Fort McMurray Wildfire (~$3.8B), the 2013 Calgary flooding (~$1.7M), and the 1998 ice storm (~$2B) (2018 IBC Fact Book). It is important to note that the dollar figures mentioned here are only insured losses, and the total economic loss would be much higher. 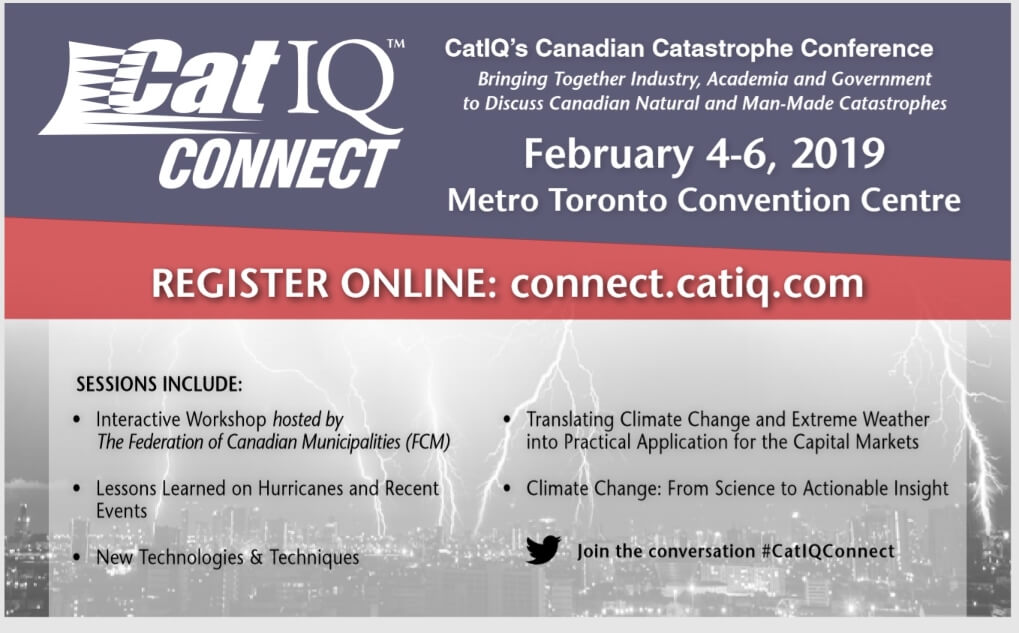 Many communities and organizations across Canada are working towards mitigating and adapting to extreme weather risk. The annual Canadian catastrophe conference, CatIQ Connect, brings together all sectors to discuss and foster collaboration before disasters. The conference draws more than 200 delegates, where themes are along the lines of preparedness and resiliency, adaptation, new research, and tools. The upcoming event will be held from Feb 4-6, 2019 at the Metro Toronto Convention Centre.